The Delhi High Court sought explanation from the police for the presence of vending and hawking activities in Chandni Chowk despite the current ban. 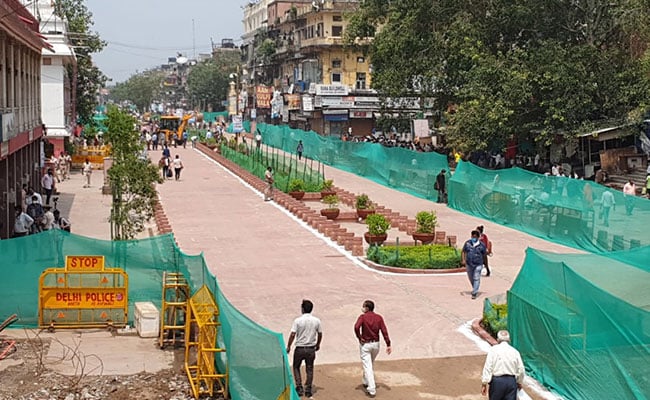 Despite court orders to install 330 CCTVs in Chandni Chowk, not even one has been installed yet (File)

The Delhi High Court Monday asked the police and North Delhi Municipal Corporation (NrDMC) to explain how vending and hawking activities are being allowed despite the ban in the Chandni Chowk area, which is undergoing redevelopment.

The court also issued a notice and asked the Delhi Police and the North Delhi Municipal Corporation to respond to a plea filed by Chandni Chowk Sarv Vyapar Mandal seeking direction against a survey being conducted by the Town Vending Committee (TVC) in no-hawking / no-squatting areas in Chandni Chowk, Subhash Marg and other prohibited areas of City Sadar Paharganj (SP) Zone.

A bench of Justices Vipin Sanghi and Jasmeet Singh directed that while conducting the survey, the Town Vending Committee shall make a distinction and take a note of hawkers who are occupying spaces in no-hawking or no-vending zones.

"You continue with the survey but take into account the objections raised by the petitioners. Your survey should clearly say that these are the street vendors who are sitting in hawking zone and these are the ones who are in the no-hawking or no-vending zone," the bench said.

The court asked the authorities to file their replies to the plea and listed the matter for further hearing on November 10.

It also asked North Delhi Municipal Corporation to place on record the scheme relating to no-hawking and no-squatting areas.

Delhi Police was represented through additional standing counsel Anuj Aggarwal in the matter.

Senior advocate Sanjeev Ralli, representing Chandni Chowk Sarv Vyapar Mandal, submitted that the high court had repeatedly  in no-hawking and no-vending zones, there shall not be any encroachment. Despite that, hawkers and vendors are sitting there and now the Town Vending Committee is conducting a survey, he said.

"The survey team members are taking unauthorised cognisance of the presence of illegal hawkers and squatters in Chandni Chowk and Subhash Marg who are sitting and operating from the no-hawking / no-squatting areas notified by North DMC in City SP Zone," Mr Ralli stated.

"Rather, above unauthorised, highly arbitrary and motivated practice adopted by the survey team members also establishes that at present illegal hawkers and squatters are being permitted to sit and operate in no-hawking / no-squatting areas (with concurrence of survey teams) by North DMC and Delhi Police, in spite of various restraint / prohibitory orders passed earlier by this court," the plea, filed through Mohit Mudgal and Shivani Rautela, said.

On installation of 330 CCTVs in the entire area, Mr Ralli submitted that despite the court's direction not even a single CCTV has been installed till now.