Union Minister for Minority Affairs Mukhtar Abbas Naqvi was among the people who paid obeisance to Sufi saint Hazrat Nizamuddin Aulia on the first of the reopening of the shrine, caretakers of the dargah said. 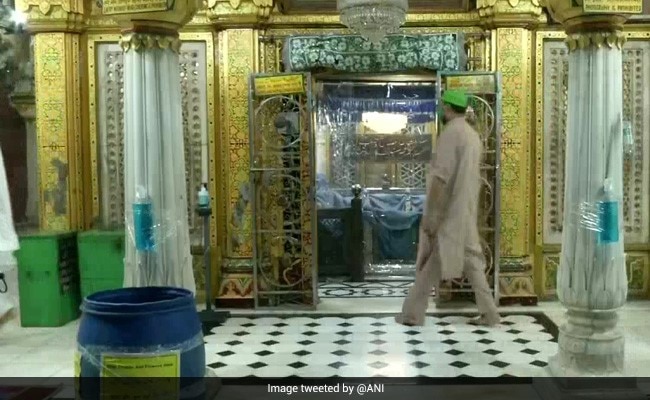 The famous Hazrat Nizamuddin Dargah, which was closed over five months ago after the outbreak of the coronavirus, opened for devotees on Sunday, with a "moderate" number of people visiting the shrine to pay obeisance to the Sufi saint.

Union Minister for Minority Affairs Mukhtar Abbas Naqvi was among the people who paid obeisance to Sufi saint Hazrat Nizamuddin Aulia on the first of the reopening of the shrine, caretakers of the dargah said.

The minister appreciated measures taken by the shrine to protect devotee from the coronavirus disease, they said.

The graves of Hazrat Nizamuddin Aulia and Amir Khusro in the dargah complex have been covered from all sides with plastic sheets "so that people do not touch them while paying obeisance, as it could lead to people getting infected with the virus," Nazim Nizami, one of the caretakers of the shrine, said.

Qawwali evenings devoted to the Sufi saint have been suspended for the time being to avoid gatherings in the shrine's courtyard.

"We were able to manage well the devotees who turned up in moderate numbers on the first day of the opening of the dargah. The number of devotees was more in the morning hours and it reduced in the afternoon, and again increased in the evening," Mr Nizami said.

People adhered to various safety measures like use of sanitisers and face covers as well as social distancing, he said.

There were separate entry and exit gates for devotees, and markings were made on the floor to ensure social distancing by them, Mr Nizami said.

"The Qawwali evenings, which are hugely famous among followers of the Sufi saint, have been suspended for the time being. We are not allowing people to sit in the courtyard of the dargah, as they used to do before, and (asking them to) leave after paying obeisance," he said.

Nizami said that crowd management at the shrine will be further improved after assessing footfall in the coming days.

The dargah located in the Hazarat Nizamuddin area of south Delhi was closed with the announcement of the lockdown due to the coronavirus outbreak in March.

Under the ''Unlock'' process, religious places in Delhi started opening after June 8, but the dargah remained closed due to increase in COVID-19 cases, caretakers of the shrine said.