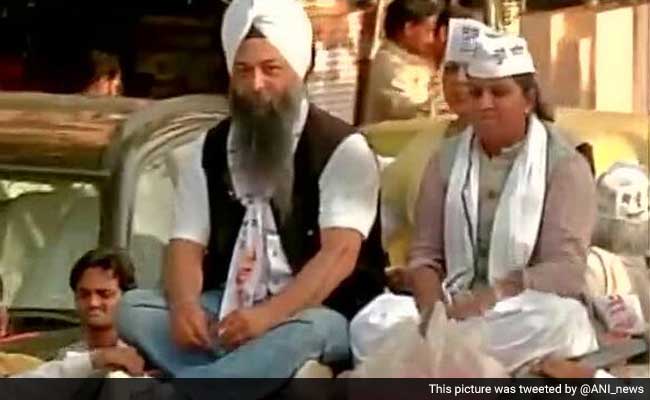 Jarnail Singh was admitted in the Rajiv Gandhi Super Speciality Hospital for the past 12-13 days.

Former AAP MLA Jarnail Singh passed away here on Friday due to COVID-related complications, his family said. He was 48.

Jarnail Singh was admitted in the Rajiv Gandhi Super Speciality Hospital for the past 12-13 days, his brother Karnail said.

"His High-resolution CT (HRCT) of the chest score was 14/25 which was a little above moderate in terms of infection. But then his condition deteriorated," he said.

"Deeply saddened by the untimely demise of former Delhi MLA Sh Jarnail Singh ji. May God bless his soul. He will always be fondly remembered for his contributions to society," Mr Kejriwal said in a tweet.

Manish Sisodia remembered Mr Singh as someone who fought for justice for the victims of 1984 anti-Sikh riots.

"The news about the demise of Jarnail Singh, a former colleague in Delhi Assembly is extremely sad. A voice which fought for justice for the victims of 1984 genocide has left us," he said in a tweet in Hindi.
In 2009, during his stint as a journalist, Singh also flung his shoe towards then Union home minister P Chidambaram in protest against his remarks on the clean chit to Congress leaders in the 1984 anti-Sikh riots case.

He was sacked by his organisation for the act, following which he started a Reverse Osmosis (RO) company for sustenance and continued working for the families of the victims of 1984 anti-Sikh riots.

When the newly formed Aam Aadmi Party (AAP) assured justice to the victims of the 1984 anti-Sikh riots, he joined it and became the Sikh face of the political party.

In 2014, the party fielded him as its West Delhi candidate, but he was defeated by the BJP''s Parvesh Singh Verma.

However, in 2015, he contested from the Rajouri Garden Assembly seat in 2015 and defeated then sitting MLA Manjinder Singh Sirsa. But his term as an MLA was brief. In 2015-16, when the AAP was making buzz in Punjab, he was deputed to the state for party work.

In the 2017 assembly polls, he was fielded from Lambi seat against then Punjab chief minister Parkash Singh Badal, a battle which he lost.

"Arvind (Kejriwal) had visited my place and requested my mother to let me contest against Badal," Jarnail Singh would often say.

The electoral loss, however, relegated him in the party circles.

In August last year, the AAP suspended him after a picture with objectionable comments against Hindu gods was posted from his Facebook account.

He deleted the post after facing backlash on social media, and claimed that the image was mistakenly published by his son during an online class.