At least 10 trucks of East Municipal Corporation of Delhi (MCD), going to a landfill, were found allegedly violating the norms. 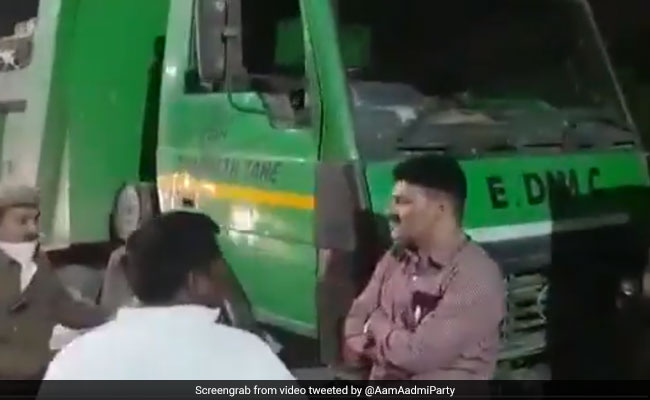 The transport department imposed fines on vehicles that flouted the norms.

With air pollution levels in Delhi and adjoining areas falling in the "very poor" category, Delhi Environment Minister Imran Hussain conducted a surprise inspection of vehicles at the Delhi-Uttar Pradesh border in Ghazipur.

At least 10 trucks of East Municipal Corporation of Delhi (MCD), going to a landfill, were found allegedly violating the norms. Their drivers, the raid team claimed, not even carrying the needed documents.

The minister, accompanied by officers from transport department, traffic police and pollution control board, checked if the Supreme Court-mandated Graded Response Action Plan (GRAP) is being properly implemented and polluting vehicles entering into the national capital are fined or stopped.

This inspection was carried out last night from 11:30 PM till 2 AM. The team stopped heavy vehicles and checked their papers.

The transport department imposed fines on vehicles that flouted the norms. The minister ordered pollution control board officials to slap a hefty penalty on the East MCD for allegedly violating the Solid Waste Management Rule 2016.

Along with this, a vehicle carrying uncovered construction material was also seized by the transport department.

The air quality in the national capital and the nearby region continued to dip on Saturday, as a thick blanket of haze engulfed the region.

According to the System of Air Quality and Weather Forecasting and Research (SAFAR), the quality of air remained in the 'very poor' category despite stringent measures being implemented to combat the menace.