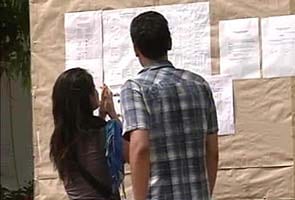 New Delhi: The Delhi University's admission process kicked off today, after colleges, on Wednesday, announced their first cut-off lists for admissions to various courses under the new and contentious four-year undergraduate programme.

The cut-offs announced this year are broadly the same as last year - the difference being in decimals. Yet, the admission criteria touched nearly 100 percent in few colleges. (See DU's first cut-off list)

This year, a lesser known college, Ram Lal Anand, has announced a cut-off of 100 percent for its Computer Science course. The cut-offs in prestigious colleges like Hindu and Shri Ram College of Commerce (SRCC) are also a reflection of the tight race to get into colleges in Delhi University (DU).

Sushant Jallan from Sirsa in Haryana scored a commendable 93 percent in his class XII examination in the commerce stream. But he won't be able to get admission to his preferred Hindu College in the elite North Campus; cut-off in the coveted Bachelor of Commerce course is at 99 percent as of now.

Sushant says he will wait for the second or third. If he doesn't get through, he has decided to train to be a chartered accountant.

The most sought-after Bachelor of Commerce course had these cut-offs in the topmost colleges of the university:


For the equally popular Bachelor of Economics course , the cut-offs were almost as high.


"I'd suggest that students choose course over college as it is the course that determines a child's future. Also my message to the students is that they should not give up hope," said Pradyuman Kumar, Principal, Hindu College.

Promoted
Listen to the latest songs, only on JioSaavn.com
Some like Diksha Goel can consider themselves lucky. She just about made it to Hindu College with her percentage being an exact match of the lower cut-off range for the commerce course.

But for many other students, the struggle has just begun. Their only hope - lower cut-offs in the second and third admission lists of many of these colleges.