Denying all allegations of the protesters, the Delhi Police asserted that no use of force was exercised and that they have not received any medico legal case from any of the protesters yet. 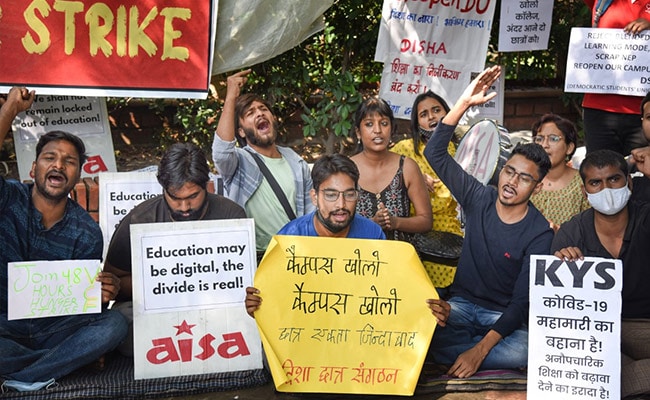 The police said they have detained 28 students, but denied using force.

Delhi University students alleged that they were beaten up by police on Wednesday when they were assembling for their hunger strike inside the campus to demand complete reopening of the university.

The police said they have detained 28 students, but denied using force.

Members of the Left-affiliated All India Students' Association (AISA) and other student bodies have been on a hunger strike for two days to press for their demand of reopening the campus.

"The Delhi Police unleashed brutal violence upon our peaceful hunger strike as we were assembling for the third day. We were beaten, our comrades Manik and Ayush, who are on hunger strike for more than 48 hours were violently thrashed by the Delhi Police. Several others have been injured," they claimed in a statement.

"We appeal to all friends and comrades to assemble at the Special Cell Office, Maurice Nagar," the statement added.

A senior police officer from the north district said the protesters had been staging a hunger strike for two days from October 25 to 26. Information was received that there was a meeting scheduled by them on October 27 regarding this and they were planning to strengthen their strike.

"Sensing the situation, we had deployed a huge force and eight women and 20 men who were part of the protest have been detained peacefully as per legal protocol. Our force contained over 30 female staff and two platoons of male force from our end as part of security arrangements to ensure no untoward incident takes place," the officer said.

Denying all allegations of the protesters, the Delhi Police asserted that no use of force was exercised and that they have not received any MLC (medico legal case) from any of the protesters yet.

The detention was done peacefully and the detained protesters will be released soon, the police added.