Doctors Protest In Delhi Over Violence Against Healthcare Professionals

The call for the nationwide protest was issued by the IMA, which said 3.5 lakh doctors, with proper Covid protocol, participated in the agitation. 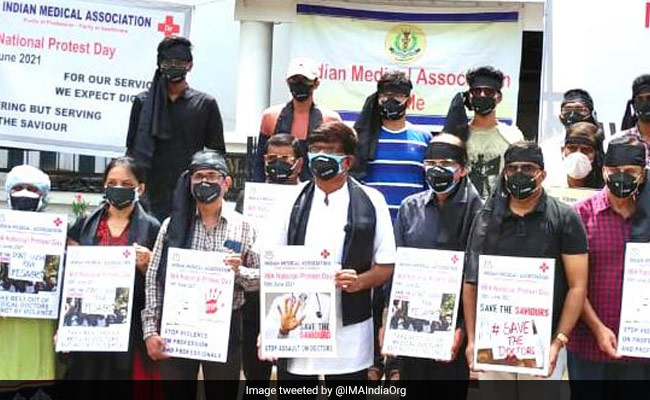 Doctors have sought enhanced security of hospitals and that hospitals be declared "protected zones".

A nationwide protest called by the Indian Medical Association over recent incidents of violence against healthcare professionals and demanding a central law to curb such cases, was held on Friday.

The Indian Medical Association (IMA), in a statement, said as many as 3.5 lakh doctors, with proper Covid protocol, participated in the agitation.

"All across the country, in every state, in different hospitals, the doctors and healthcare professionals wore black badges, ribbons and black shirts, and raised slogans "Save the Saviours" and uploaded their photographs on social media," the statement said.

As many as 3.5 lakh doctors, individually and in groups, with proper Covid protocol, participated in this, it said.

The IMA said medical professionals from other specialty organisations like ASI, API, FOGSI, among others, also joined the protest, while several corporate hospitals put up hoardings demanding safety of doctors.

"In Delhi, in 10 different places, including outside AIIMS, the protest was organised by the doctors, junior doctors and medical students," it said in the statement.

The IMA and its branches also submitted a memorandum to Prime Minister Narendra Modi, requesting him to ensure safety of the medical fraternity and also take appropriate action against people involved in spreading fake news against Covid vaccination and its protocol.

"In many medical colleges, students boycotted their classes and organised virtual students' parliament in which more than 1,000 students participated. Today, the national president and the secretary general, IMA met Union health secretary and submitted the memorandum to him. They also met Delhi Special Police Commissioner and requested for enhancing security for the hospitals," the statement said.

The doctors have sought enhanced security of hospitals and that the hospitals be declared as "protected zones".

"Those who assault doctors or the profession should be punished under the fast-track trial mode. IMA believes that the Government of India will respond to this unified peaceful protest and initiate steps to bring a central law, and ensure the medical fraternity serves without fear in the hospital premises.

"IMA urges that these demands be fulfilled ahead of July 1, the Doctors' Day, as a gift to the suffering medical fraternity," the statement added.

In Delhi, a group of doctors belonging to both the IMA and FAIMA (Federation of All India Medical Association) stood with placards outside the AIIMS main gate to raise their voice on the issue.

The doctors, both in government and private sectors, organised standing protest in front of the secretariat in Kerala, and in various district headquarters besides hospitals.

About 35,000 doctors of the IMA Tamil Nadu branch also joined the nationwide protest.

"Our members wore black badges as a sign of protest. Our medicare service to the patients remained unaffected," A K Ravikumar, honorary state secretary of IMA, told PTI.

Cases of violence against doctors and other healthcare workers have been reported lately from some parts of the country, including Jammu and Kashmir and Assam among other places.

On June 1, a doctor at a medical facility in Hojai in Assam was allegedly assaulted by attendants following the death of a patient suffering from Covid and pneumonia at Udali Model Hospital.

The National Human Rights Commission had later taken cognisance of the case and asked the Assam government and the state police chief to inquire into the alleged assault and take "needful, preventive and punitive action" in the case.