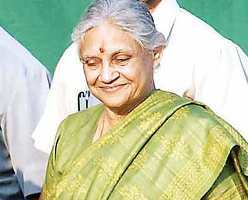 The allotment of flats, constructed under the Jawaharlal Nehru National Urban Renewal  Mission project, commenced after Dikshit chaired a meeting of the Delhi Urban Shelter Improvement Board (DUSIB).

"In order to make Delhi slum-free, it is imperative to initiate such a process. The process of allotment will instil confidence amongst most of the aspirants for houses who are awaiting allotment," said Dikshit.

About 9,660 flats have already been built and 5,184 more are likely to be completed soon. The DUSIB has begun identifying those eligible for relocation from shanties to these flats by surveying 46 slums, the chief minister added.

The DUSIB has decided to raise the flat applicants' eligibility criteria from Rs60,000 annual family income to Rs 1 lakh.

Urban Development Minister A.K. Walia added that 10,200 more flats would come up in the city soon at an estimated total cost of Rs 425 crore.