The development comes even as the ruling AAP has maintained that Delhi has a 'State Naming Authority' for all such matters, and if it receives any such proposals, it will appropriately review them. 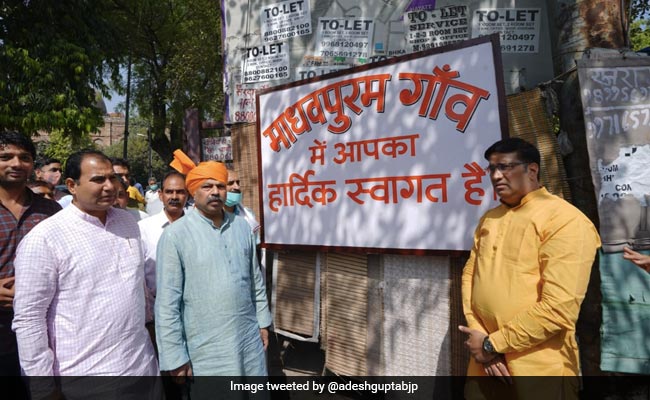 The BJP leaders in Delhi on Wednesday attended a ceremony to rename South Delhi's 'Muhammadpur' village to 'Madhavpuram', saying the locals did not want to associate themselves with any "symbol of slavery".

The party's Delhi unit president Adesh Gupta also posed with workers and locals in front of a freshly painted board that welcomed visitors to 'Madhavpuram'.

The development comes even as the ruling AAP has maintained that Delhi has a 'State Naming Authority' for all such matters, and if it receives any such proposals, it will appropriately review them and move forward following the due procedure.

"Completed the naming process of Madhavpuram today after a proposal was passed by the municipal corporation. Now this village will be known as Madhavpuram instead of Muhammadpur. No Delhiites want to be associated with any symbol of slavery despite 75 years of Independence," Mr Gupta said in a tweet.

He said the process to change the name was taken forward by the locals and the BJP workers after a proposal by the local BJP councillor in this regard was passed by the South Municipal Corporation of Delhi.

The proposal to change the name of 'Muhammadpur' to 'Madhavpuram' was passed and sent to the Delhi government in December last year. However, the government is sitting on it for the "last six months", Mr Gupta alleged.

Last week, the Delhi BJP had also said the party will send a proposal to the Kejriwal government demanding that the names of 40 villages in the city be changed as they symbolise a period of "slavery".

The Aam Aadmi Part, however, charged that the BJP did not want the government to function as per the due process and it was looking for opportunities to start hooliganism.