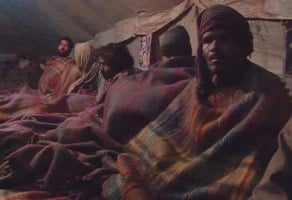 New Delhi: Even as Delhi shivers in the bone-chilling winter, the city's homelessprefer to sleep on the streets, rather than use the 150 night shelters.Said to range from 67,000 to 150,000, they cite reasons of lack ofsafety and facilities.

To cater to the homeless, there are 64 permanent shelters and 86temporary shelters, maintained by the Delhi Urban Shelter ImprovementBoard (DUSIB) - but they only offer shelter to 12,000 people.

According to Mother NGO for Homeless, the nodal agency coordinating theoperation of shelters, the freezing cold has taken about seven livestill Monday evening. The toll last winter was 300.

"On an average, 2,500 people have been coming to the temporary shelters, while many don't opt for the permanent shelters as they are far away from the city," Amod Kumar of Mother NGO, run by St. Stephen's Hospital, told IANS.

The homeless say the deaths are nothing new for them and they still prefer not to stay in the night shelters for various reasons, ranging from the distance, crime and lack of facilities.

"Last year during winters, I left my four-month-old child and went to the toilet. When I came back, I could not find my child," said 30-year-old Khadeja, staying in the 17th century Jama Masjid which gives refuge to a large number of people every night.

Delhi Sunday recorded the coldest day in the past five years with the day temperature dropping to 11 degrees Celsius, 10 degrees below normal.

A homeless woman, Dimple, told this IANS reporter: "We feel more secure on the streets as there are a lot of thefts inside the shelters. From beggars to drug addicts, many people don't allow us to sleep in peace. So, we, a group of five women with our children, sleep at Yamuna Pushta near Nigambodh Ghat every night."

She also said two people known to them, including 40-year-old Naveen, a rickshaw puller, died of the cold Friday.

On New Year's Eve, 35-year-old Bhima, a balloon seller, died as he slept under the open sky on a chilly night near the Pusa Road roundabout.

Bhima was part of the group of 250 homeless people who were left in the lurch when the Municipal Corporation of Delhi (MCD) demolished a temporary night shelter put up by the Delhi government in a park near the roundabout.

Meanwhile, a DUSIB official claimed that the temporary night shelters were far better this time than the previous year.

However, a homeless man said the tents were mostly of poor quality material and often had gaping holes. "Basic requirements like blankets, doormats and sanitation are not provided," Sanjay Kumar told IANS.

According to a survey conducted in December 2010 by the NGO, there are over 67,000 homeless in Delhi, of whom 15 percent are women and 10 percent children. However, according to other NGOs, the number may be as large as 150,000.

"The number of homeless people has expanded inexorably; with the Commonwealth Games and Delhi Metro construction, many migrant labourers have come to the city. Any figure less than this must be a gross underestimation," said Sanjay Kumar, project officer for Ashray Adhikar Abhiyan (AAA) - a rights body that conducted a study of Delhi's homeless in 2000.

Promoted
Listen to the latest songs, only on JioSaavn.com
The homeless are mostly unemployed people from rural areas of Uttar Pradesh, Bihar, West Bengal, Rajasthan and Madhya Pradesh, who have come to Delhi for work and are usually labourers, or handcart and rickshaw pullers.