"The 59-year-old chimpanzee (named Rita) has not been keeping well since July 27. She has not been eating properly and has become frail. She doesn't move around much," a Delhi zoo official said. 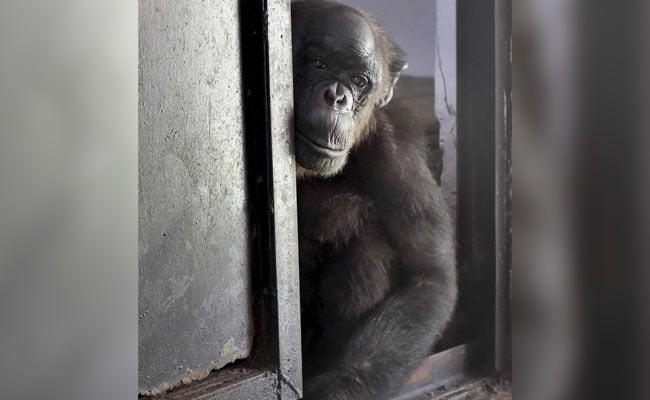 According to officials, Rita is fighting age-related health problems and has been put on liquid diet

In the wake of a woman moving the Delhi High Court alleging negligence in the treatment of the country's oldest chimpanzee, Rita, the Delhi zoo has installed a TV screen outside its enclosure for visitors to watch the ailing animal which cannot move around much.

The woman, who claims to be an animal rights activist, has alleged that the zoo administration is not providing proper treatment to the chimpanzee and moved the Delhi High Court on Friday seeking its intervention.

According to officials, the chimpanzee is fighting age-related health problems and has been put on liquid diet.

"The 59-year-old chimpanzee has not been keeping well since July 27. She has not been eating properly and has become frail. She doesn't move around much," a Delhi zoo official said.

"A decision to install the TV was taken after the woman alleged that the zoo administration was trying to hide something and that proper treatment was not being given to the chimpanzee," he said.

With the help of a CCTV camera installed inside the enclosure, visitors can watch the animal on the 55-inch TV screen put up outside the gate.

"The woman claimed that the zoo administration did not allow her to see Rita. We cannot allow everybody near the ailing chimpanzee. Only officials and veterinary officers are allowed. Since the TV screen has been installed, now everyone can see how the staff is taking care of the animal," the official said.

Delhi Zoo Curator Riyaz Khan said, "We are providing her vitamins, minerals, liver tonic and iron supplement syrup regularly. Since July 27, she is on a diet of juice, coconut water and milk with ground almonds and walnuts."

Born on December 12, 1960, in Amsterdam Zoo and acquired by the Delhi zoo in 1990, Rita is the oldest chimpanzee in India and probably the "oldest in Asia", according to the Limca Book of Records. On average, a chimpanzee has a lifespan of around 50 years.

On Sunday afternoon, Rita was seen resting on a pillow, beside a waterbed and a pile of bananas, cucumbers, guavas, pomegranates that the zoo staff kept for her.

"We provided a mattress to the chimpanzee as it has developed bedsores. A TV screen has also been installed inside the enclosure for Rita to watch videos," the official said.

Rita gets excited on watching TV and plays with a tyre, he said, adding the zoo's veterinary officers are regularly monitoring her health condition.

A team of experts from the Indian Veterinary Institute in Bareilly, is treating the animal.

"Utkarsh Shukla, the deputy director of the Lucknow zoo, visited the chimpanzee on Thursday and suggested the line of treatment. A three-member team constituted by the Central Zoo Authority also took stock of her health," another official said.