Delhi Weather Today: The temperature across Delhi and NCR for Valentine's Day will remain pleasant, with a forecast high of 20 degrees Celsius and a low of 12 degrees Celsius. Wind chill will be a factor today, with the day's average temperature of 14 degrees feeling like 11 degrees. 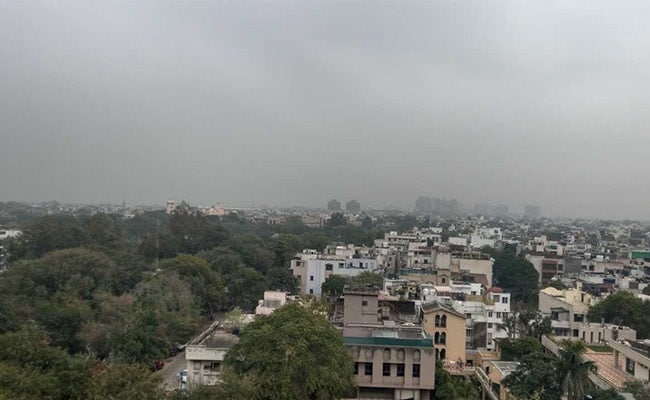 Delhi Weather Today: Delhi to get moderate-to-heavy rain, with intermittent hail through the day

Several flights were diverted at the Delhi Airport between 8 am and 10 am this morning as a thunderstorm hit the national capital and its adjoining cities Noida, Ghaziabad and Gurgaon. While moderate-to-heavy rain lashed most parts of Delhi NCR, there were reports of a hail storm at north Delhi's Civil lines area.

The flights diverted were domestic carriers. GoAir G8 709, which was arriving from Ahmedabad was diverted to Rajasthan's Jaipur while Vistara flight UK 946 was diverted to Uttar Pradesh's Lucknow. IndiGo too had put out an advisory yesterday keeping in mind the weather forecast.

A winter chill returned to the national capital this morning as rain coupled with wind, blowing south-south east at a speed of around 15 to 20 km/h brought down the early morning temperature. The weather department also said that Delhi is expected to receive intense spells of rain and thundershowers with isolated spells of hail storms for the next two days.

Though the weather at 7:30 am was ideal for commuters to roll down their windows on the drive, this changed quickly, with a thunderstorm and heavy rain shortly after 8:30 am. The weather forecast for Valentine's Day had mentioned moderate-to-heavy rain coupled with spells of hail.

Valentine's Day, however, won't be a complete dampener for couples eager to head out on their dates as the hourly weather forecast shows a pleasant evening between 4pm and 6 pm. For commuters though, rush hour traffic might be adversely affected, as is the case on most rainy days. Flights and trains might also be affected due to early-morning fog, and during a hail storm.

The temperature across Delhi and NCR for Valentine's Day will remain pleasant, with a forecast high of 20 degrees Celsius and a low of 12 degrees Celsius. Wind chill will be a factor today, with the day's average temperature of 14 degrees feeling like 11 degrees.

Humidity will remain low, as will the UV (Ultra-Violet) index - hovering between 1 and 10 - which is good. Once the early-morning fog lifts, visibility will be better than usual. The air too would be cleaner, with the Air Quality Index or AQI likely to drop to 'poor' from 'very poor'. PM2.5 or particulate matter will be marginally over 200, which too would be an improvement compared to the last 72 hours.

In a statement yesterday, IndiGo Airlines wrote: "IndiGo is slightly adjusting its flight schedule in the coming days by approximately 30 flights per day. This is in order to stabilize the network and operations impacted due to various ongoing NOTAM and predicted bad weather in the coming days." NOTAM, or notice to airmen, is given to pilots and include information on potential hazards on a flight route.

"In order to avoid inconvenience, these adjustments are being made in advance enabling adequate notice to passengers. They are being accommodated close to their original flight schedule. These adjustments amount to 1 to 2% of the originally planned number of flights," IndiGo Airlines stated.

It is not clear whether other airlines will change their flight schedules, but it would be advisable for passengers of all airlines to check their flight status and timings well in advance. Leaving an hour earlier than usual for the airport would also help avoid last-minute delays.

Disruption in flight operations were caused by the hailstorm and heavy rain last week, when over 30 flights were diverted from the Delhi airport. Parts of Delhi and neighbouring areas were hit by two spells of heavy hailstorm last week, the first in nearly a decade.

Though Delhi is known for its winters, with many having tales of their outings during the well-known "Dilli ki sardi", a white Delhi is quite unusual. In fact, some of the spectacular photographs from last week's hail storm can safely be called 'never seen before' pictures.

Though Delhi's gets its share of hail almost every other winter, the scale of last week's hail storm took everyone in the national capital completely by surprise. The storm soon found its way to social media, with dozens of people in Delhi and adjoining Noida posting photographs of the "Shimla moments".

Here are a few photographs: