Over 30 Flights Diverted From Delhi Airport After Heavy Rain, Hailstorm 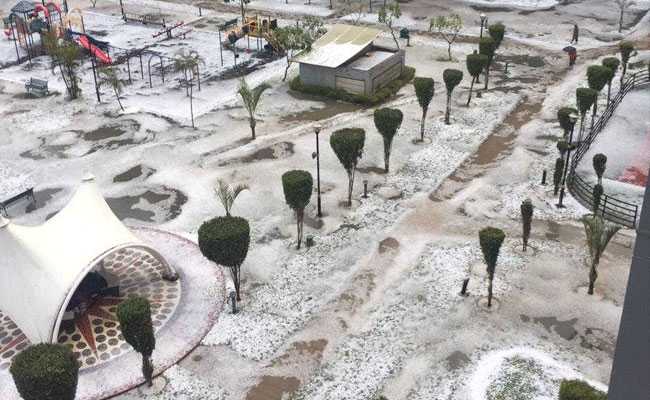 Delhi weather: Several parts in Delhi and neighboring cities were hit by hailstorm.

Over 30 flights were diverted on Thursday evening from Delhi's Indira Gandhi International Airport due to bad weather as several parts in national capital and neighbouring cities were hit by hailstorm and heavy rain.

Social media users from Delhi and Noida, many of them caught unaware, shared pictures and videos of the hailstorm on Twitter and Facebook.

The weather office, earlier in the day, predicted hailstorm as the national capital woke up to an inclement weather. "The sky will remain generally cloudy throughout the day with light to moderate rain or thunderstorm and hail likely in the later parts of the day as well," the India Meteorological Department (IMD) said earlier in the day.

The rains, however, failed to improve the air quality in Delhi. "Overall air quality over Delhi is ''very poor''. Air quality has not improved significantly as rainfall was not sufficient enough and wind speed was also moderate," System of Air Quality and Weather Forecasting And Research, also known as SAFAR, said.

Normal life was disrupted in several parts of north India too due to heavy rains and snowfall.

The Kashmir region remained cut off for the second consecutive day as the Srinagar-Jammu National Highway was closed due to heavy snowfall. All flights were cancelled at the Srinagar airport. An avalanche warning of varying danger levels has been issued by the state authorities for 16 of the 22 districts next 24 hours.

In Uttarakhand, several schools and colleges were closed in some districts due to heavy rainfall.