Rain In Delhi, Nearby Cities Brings Relief From Summer Heat For Residents

Neighbouring cities of Noida and Ghaziabad also reported strong winds and a dip in temperature. 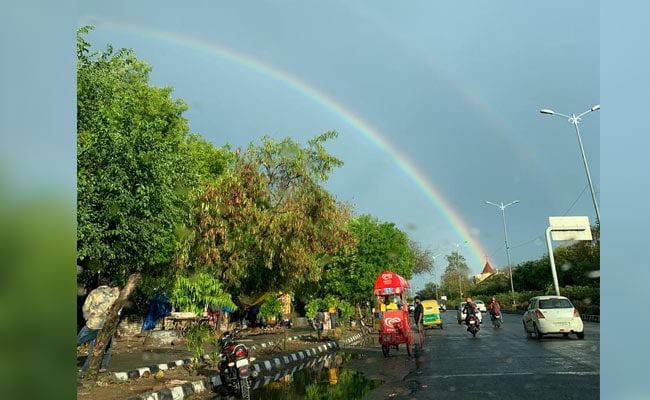 The rain and cloudy sky also led to a dip in temperature in Delhi.

Light rain and strong winds brought down the temperature in parts of Delhi and its nearby areas today. The rain started at around 4.10 pm in Delhi. Neighbouring cities of Noida and Ghaziabad also reported light showers and strong winds an hour later.

In Ghaziabad, the first shower was reported at around 5.15 pm.

As soon as wind speed picked up and the sun gave way to clouds and rain, people in the national capital took to Twitter to share their excitement about the pleasant weather.

The Delhi-NCR also witnessed a rainbow minutes after the rain stopped.

Beautiful weather,cool breeze & light rain instantly lifts your mood up ,no matter how gloomy you have been. #Delhi right now pic.twitter.com/mlHpNLcnRJ

Earlier this week, Delhi had recorded the hottest day in May in 18 years as Rajasthan's Churu touched 50 degrees Celsius.

Mercury in parts of Haryana, Maharashtra, Uttar Pradesh and Madhya Pradesh had oscillated between 46-48 degrees Celsius as many parts in Punjab, Himachal Pradesh and Jammu and Kashmir recorded temperatures in the mid-40s.