Several parts of the national capital recorded their maximum temperature above the 42-degree mark, with Sports Complex being the warmest place in the city at 43.1 degrees Celsius. 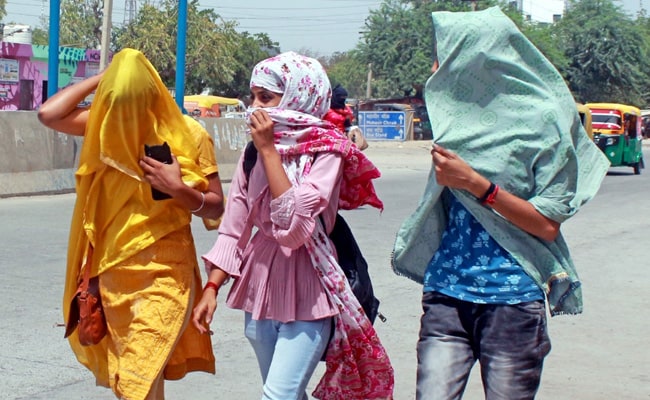 The maximum temperature may even soar to 46 degrees in parts of Delhi, said the weather office

The maximum temperature at the Safdarjung Observatory -- Delhi's base station --  breached the 40-degree mark on Monday and a heatwave will see it soaring to 44 degrees Celsius by Thursday.

Several parts of the national capital recorded their maximum temperature above the 42-degree mark, with Sports Complex being the warmest place in the city at 43.1 degrees Celsius.

Partly cloudy weather due to a Western Disturbance over Afghanistan had provided some relief from a prolonged heatwave spell in northwest India. However, another punishing heatwave is in the offing, a Meteorological Department official said.

The maximum temperature may even soar to 46 degrees Celsius in parts of Delhi, he said.

A yellow alert warning of a heatwave spell in the national capital starting April 28 has been issued.  The India Meteorological Department (IMD) uses four colour codes for weather warnings -- green (no action needed), yellow (watch and stay updated), orange (be prepared) and red (take action) The city has recorded eight heatwave days in April this year, the maximum since 11 such days witnessed in the month in 2010.

A severe heatwave is declared if the departure from normal temperature is more than 6.4 notches, according to the IMD.

The weather department had earlier said northwest India and adjoining parts of central India are likely to see more intense and frequent heatwave conditions in April.

India recorded its warmest March in 122 years with a severe heatwave scorching large swathes of the country during the month.

The weather department attributed the heat to the lack of rainfall due to the absence of active western disturbances over north India and any major system over south India.