Sandeep Shahi, who lost his wife in an accident, and appeals to citizens to wear helmets and seat belts while travelling and to follow the traffic rules. 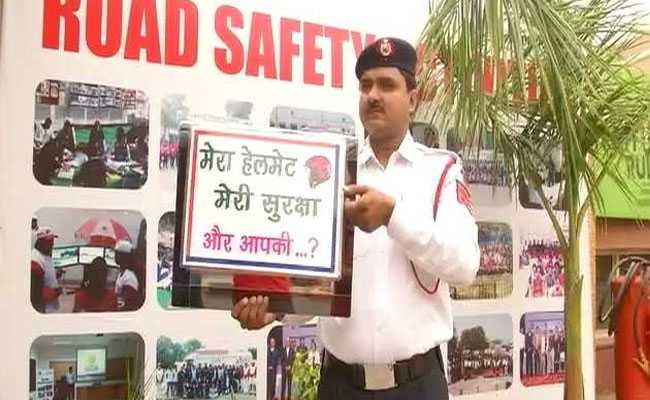 Sandeep Shahi, a head constable in Delhi traffic police, has mastered the art of rapping and he is using it to promote road safety in the national capital.

Mr Shahi has other ways too to persuade motorists to abide by the traffic rules. Sometimes, he uses a mirror to make them feel guilty. The cop also buys helmets using his own money and gifts it to others. So far, he has distributed around 700 helmets.

His rap, inspired by actor Ranveer Singh's Gully boy, is by people on various social media platforms like Twitter. The cop sings "Apna Time Aayega" with his own set of lyrics to promote road safety.

Mr Shahi, who lost his wife in an accident, appeals to citizens to wear helmets and seat belts while travelling and to follow the traffic rules.

"I came to know about the viral video of my rap song. People are very casual about road safety and are reluctant to follow traffic rules. So, I felt it was my responsibility to make them aware," Mr Shahi said while speaking to ANI.

"I was deeply hurt when my wife suffered injuries in the road accident. Also, I see many young people taking traffic rules very lightly. So, I decided to write this rap, it was the best way to connect with the youth," he added.

Mr Shahi also uses placards with messages such as "Hamesha ISI mark waala helmet pehnein" (one should always wear helmets that have an ISI mark on them) and "Mastishk suraksha kawach" (helmet is the safety equipment for your head).