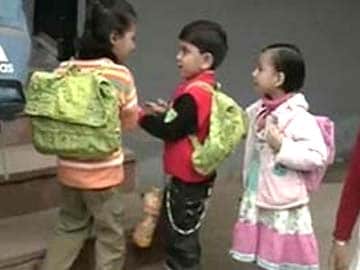 "It has been decided to enhance the outer limit of six kilometre kept for the neighbourhood criteria to eight kilometre. While six kilometres limit would satisfy the bulk of the requirement, some parents had raised concerns on narrowly missing the criteria because they had identified specific schools.

"Any further increase would vitiate the concept of neighbourhood schools, and increase the travel time for small children considerably," stated the order.

However, there was no review of the management quota which was abolished by the Lieutenant Governor in his December 18 guidelines for admission to nursery in private unaided recognised schools of the capital.

School associations have been demanding more autonomy in selection process including freedom to admit students under the management quota.

The guidelines issued by Mr Jung on December 18 gave 70 points out of 100 in the open category seats under the "neighbourhood' criteria.

The Lieutenant Governor, however, discarded the suggestions to have slabs in the neighbourhood criteria owing to limited seats for admission.

"Slabs with more weightage for shorter areas would deny most children from admission," the order stated.

Mr Jung's order did not review the management quota.

"There is possibility of misuse of this quota and this cannot be accepted in a society that seeks to provide equal opportunity in education for all that includes the poorest of poor and the weakest of the weak. The intent is to ensure to the maximum extent possible that admission for children would be in a transparent and fair number," the order mentioned.

The order also clarified that the staff/employees quota will apply in the case of grandchildren also.

On the issue of the five per cent quota for girls in co-ed schools, the order stated that the impression that it would limit the admission of girls to said per cent of the available seats is wrong.

"This is incorrect. The five per cent quota is a reservation to encourage education to the girl child and to ensure that where there are limited seats, the girls are not deprived in favour of the male child.

"Girl children would be entitled to the normal admission process for open seats the same as boys in a transparent manner," the order stated.

Meanwhile, some private schools were not pleased with the order and said they will approach the court seeking relief.

Promoted
Listen to the latest songs, only on JioSaavn.com
"We will call a meeting of the committee in a couple of days and decide future course of action. If we do not get any response from the government, we will approach the court," said S K Bhattacharya, president, Action Committee for Unaided Recognised Private Schools.