The entrance of the secretariat building, located at I P Estate near ITO, was completely inundated after an hour's rain. 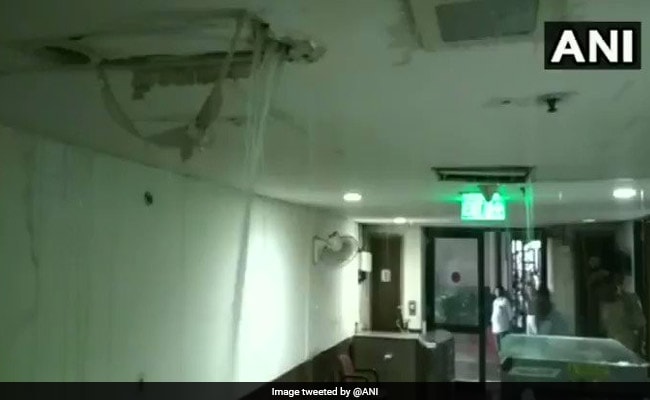 Water leaking from roof at the Delhi secretariat building

Lightning and thunder ripped through the Delhi sky on Friday afternoon along with incessant rain. The afternoon pouring slowed traffic during rush hour as the sky darkened and roads were flooded within seconds.

Massive jams were reported from across Delhi with with areas like South Ex, Andrews Ganj, Dhaula Kuan clogged with vehicles.

The rain also flooded a part of the Delhi Secretariat building after water leaked through the roof. Visuals showed people sidestepping the gush of water as they passed through. Water also poured in on the the baggage scan machine at the entrance of the building.

The entrance of the secretariat building, located at I P Estate near ITO, was completely inundated after an hour's rain.

The minimum temperature in the city was recorded at 27.8 degrees Celsius, a notch above the season's average.

According to the MeT department, the humidity level recorded at 8.30 am was 74 per cent.

Six Of Family, Two Others Use Fake IDs To Get Bank Cards To Shop: Cops