Many commuters took to Twitter to express their frustration and videos showed people walking on metro tracks, with their trains stuck for hours. 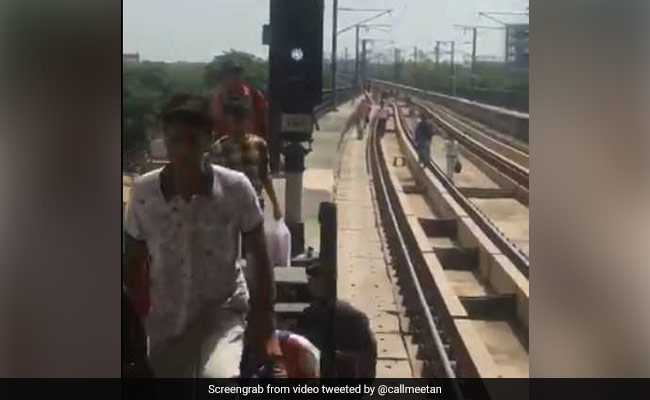 Thousands of people travelling on the Delhi Metro on the occasion of Rakshabandhan suffered a distressing experience as trains on the Yellow Line were trapped for nearly three hours today between Huda City Centre in Gurgaon and Chhatarpur metro station in south Delhi.

Many commuters took to Twitter to express their frustration and videos showed people walking on metro tracks, with their trains stuck for hours. The Delhi Metro Rail Corporation, which had promised extra trips over the weekend expecting heavier traffic due to Rakshabandhan, cited a technical glitch in the overhead electrification for the problem.

One user posted a video of a train stuck at the Guru Dronacharya metro station in Gurgaon, which showed passengers walking along the metro tracks into the platform. Another video posted from the Qutub Minar station showed a huge crowd below the metro station.

Another user shared a photo of a huge line at the Chhatarpur metro station, saying that it was a stampede waiting to happen. "Is there any plan to handle such crowds on holidays?" the user asked.

Stampede waiting to happen at Chattarpur metro station.@DelhiMetro_ is there any plan to handle such crowds on holidays? Any information to be imparted to anyone if metro service is disrupted anyway. Bhadiya hai....chutti manao pic.twitter.com/cIkYKWiZPo

More complains came in, with many users calling the halt in services Delhi metro's "Rakhi gift" in sarcasm.

@PMOIndia@DelhiMetro_
Pmo sir plz see the condition at M G road metro station.DMRC is sleeping .no clue why metro is not running .dmrc is not responding@ZeeNewsHindi@ndtvpic.twitter.com/QpA9lhAV3P

The DMRC had announced that it had decided to run nearly 600 extra tran trips on Sunday and deploy additional security personnel to handle the rush expected for Rakshabandhan.