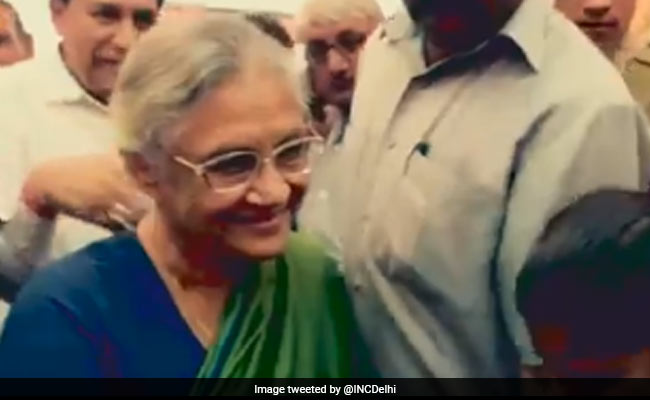 Former Delhi Chief Minister Sheila Dikshit's legacy during her 15-year stint is the focus of the Congress theme song released by the party on Friday ahead of the assembly elections. "Phir Se Congress Wali Delhi (Congress rule in Delhi again)" is the election slogan often repeated in nearly two-minute long video tweeted by the Congress's official Twitter handle.

"The Congress government's primary objective was to ensure uninterrupted power and drinking supply to the citizens of Delhi, and during the party's 15-year rule in Delhi, the power and water situations were not only improved, but also ensured that Delhi became self-sufficient in both these sectors," Delhi Congress chief Subhash Chopra told reporters as he launched the song on Friday.

The Sheila Dikshit government, that "changed the face" of the national capital, then shifted its focus on improving the infrastructure and built 67 flyovers to ease traffic jams and make the Ring Road signal-free, he further said.

The battle for Delhi, which votes on February 8, is three-cornered. The ruling Aam Admi Party trying to retain the national capital faces a tough fight from the BJP and the Congress. Votes will be counted on February 11.

Arvind Kejriwal's AAP, which has already declared all its candidates for all the 70 seats in the city, was also the first to launch election campaign song - Ache beete 5 saal, lage raho Kejriwal (Past five years have been good, keep going with Kejriwal'). It won 67 of 70 seats in the last assembly elections.

The election campaign for the BJP, which has out of power in Delhi for nearly two decades, was launched last month by Prime Minister Narendra Modi.