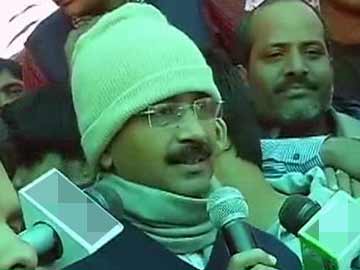 Around 1,000 drivers and conductors of the DTC gathered outside Mr Kejriwal's house to congratulate him on becoming Chief Minister of Delhi.

The DTC staff, who have been working with the public transport operator on contractual basis, shouted slogans "Arvind Zindabad", hoping that the newly sworn-in Chief Minister would work towards ending contractual employment.

Despite a number of drivers and conductors gathered outside Mr Kejriwal's house, Mr Suresh, a bus conductor, said the DTC service across Delhi would not be affected as only a section of the DTC staff had come to visit the Delhi CM.

"Kejriwal during elections promised that he would finish "Thekari Pratha" (contractual service) in Delhi after becoming Chief Minister. We are very hopeful that Kejriwal would direct DTC to make us permanent," said Mr Deshpal, a driver.

Promoted
Listen to the latest songs, only on JioSaavn.com
Activists of Youth Artist Society for Peace and Harmony also congratulated Mr Kejriwal and were seen celebrating outside his house.