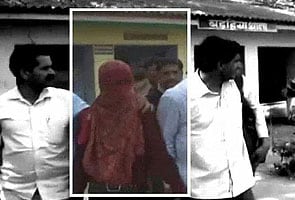 New Delhi: Delhi Police has filed a chargesheet in a city court against two men for brutally raping a five-year-old girl two months ago, under stringent provisions of newly enacted law for protection of children which entails maximum punishment of life imprisonment.

The kidnapping and rape of the minor in east Delhi had sparked public outrage against the alleged apathy of police in registering the case, leading to the suspension and transfer of cops of various ranks including an ACP, caught on camera slapping a young girl who was part of a crowd protesting the incident.

The accused Manoj Shah, 22 and Pradeep Kumar, 20, who had fled after committing the crime, were arrested from Bihar.

The police, in its charge sheet filed before Additional Sessions Judge Sanjay Garg, said the evidence collected so far showed that the accused had raped the minor after kidnapping her and had left her confined in a room for two days.

Manoj and Pradeep have been chargesheeted under various provisions of Protection of Children from Sexual Offences (POCSO) Act relating to aggravated sexual assault and for offences including kidnapping, procuring a minor girl, wrongful confinement, attempt to murder and destruction of evidence under the IPC.

The girl was rescued 40 hours later on April 17 and underwent treatment at AIIMS.

"The matter was thoroughly investigated for the offences in which the FIR was registered and which were added subsequently. The same set of facts attract two provisions of law i.e 376 D (sexual assault by a gang) and 377 (unnatural offences) of the IPC on the one hand and section 6 of POSCO Act on the other hand.

Promoted
Listen to the latest songs, only on JioSaavn.com
"The POCSO Act is a special act where the accused is required to prove innocence. So keeping in view the facts that the special law will always prevail over general law, this charge sheet is being prepared only for the offences under 363, 366A, 342, 307, 201 of the IPC and various sections of the POCSO Act," the police said in the charge sheet.