The NGT on Monday fined the Delhi government Rs 25 crore for not implementing the plastic-burning ban, and another Rs 25 crore as security deposit until it is enforced.

When burnt, plastic releases emissions that cause respiratory problems and heart ailments.

At a time when Delhi has been revealed as the most polluted city in the world, fires continue to rage in its Neelwal locality despite a 2013 National Green Tribunal (NGT) order that clamped down on the burning of plastic. Ironically, this West Delhi area is situated just 30 km from the green court.

The NGT on Monday fined the Delhi government Rs 25 crore for not implementing the plastic-burning ban, and another Rs 25 crore as security deposit until it is enforced. In addition to this, the tribunal stipulated that the administration shell out a fine of Rs 10 crore per month if the ban is not imposed. It said that the government was at liberty to extract the money either from the perpetrators or officials who failed to perform their duty.

When NDTV travelled to Neelwal area, it found that such fires are very much a part of everyday life. Passersby would casually throw polythene bags by the roadside, where they would be burnt, even as hundreds of trucks drove by to deliver waste and discarded objects for segregation and trade at the nearby plastic market. Columns of black smoke could be seen rising into the sky before dissipating into nothingness. A police truck even made an appearance on one occasion, only to trundle on until it became a dot on the horizon. 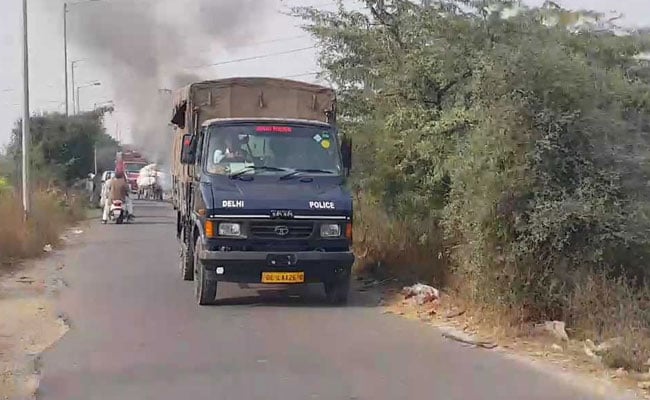 A police van trundles past as people burn plastic in West Delhi.

Nobody cares about the NGT order. It banned burning of plastic in 2013, but that did not affect the people here in the least," said Mahavir Singh, the petitioner in the case. However, his allegation did not go down well with others in the vicinity, especially plastic godown owners, who instead accused the petitioner of lighting the fires himself because he was not getting "his share of the land rent".

"Besides, these fires only happen occasionally, nothing to make such a big fuss about," declared Vikas Badgujjar, a godown owner. Mr Singh, however, was unwilling to back down that easily. He insisted that the blazes are no rare occurrence, and the fire department would be more than willing to back his claim.

A look at the local fire station's log revealed that the activist's accusations were not unfounded. "Not a day goes by when people don't burn plastic and trash around here. We roam its streets all day, dousing fires wherever we can find them," said a fire truck driver on the condition of anonymity. Trilok Sharma, a fire operator at the PVC Market, said this has been the case for the last ten years. "The police are aware of this, but they do absolutely nothing," he alleged.

Mr Singh claimed that a number of local residents had died due to pollution-related ailments in recent years. Sources in the Delhi government refused to answer specific questions on why implementing the plastic-burning ban was difficult, saying that they were still assessing the NGT order.

NDTV had earlier revealed how farmers in Punjab and Haryana were openly defying the NGT ban on stubble-burning.