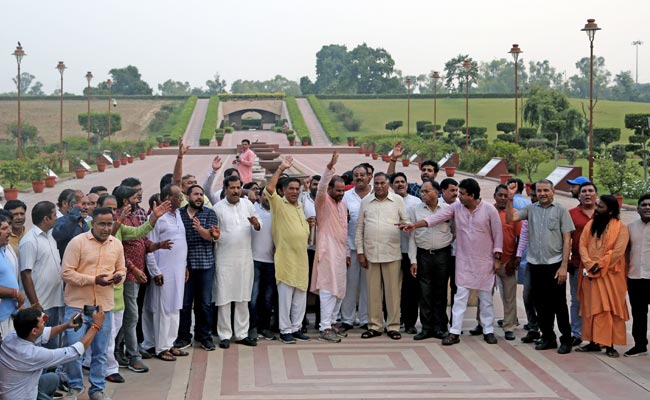 The Delhi BJP MLAs will meet the president on September 6. (FILE)

Delhi BJP MLAs will meet President Droupadi Murmu on September 6 to demand dismissal of the AAP government over a host of issues, including allegations of corruption against its ministers.

"Along with the use of abusive language against the LG, the files sent to him are not even signed by the chief minister. Cabinet notes are sent to them after the cabinet meeting. In view of all these illegal activities, this government should be immediately dismissed," he demanded.

The MLAs will meet the president on September 6 and demand dismissal of the AAP government, he said.

He said Delhi government minister Satyendar Jain is in jail for more than three months while the CBI has registered an FIR against Deputy Chief Minister Manish Sisodia in connection with irregularities in implementation of the excise scam.

"The CVC has exposed the education scam of this government. DTC scam and Delhi Jal Board scam have also come to the fore. Chief Minister Arvind Kejriwal neither took any action against his tainted ministers, nor removed them from his cabinet. The Kejriwal government is providing full protection to corruption," he alleged.

He accused the AAP government of "indulging in corruption and murdering democracy in Delhi by ignoring all rules and regulations".

"That is why, this government should be dismissed. The way opposition has been treated inside the Delhi Assembly, democracy has been put in danger.

"In the last two-and-a-half years, not even once was any discussion allowed on any proposal given by the opposition. BJP members are expelled as soon as they rise from the seat (in the house)," he said.

The AAP had claimed that the saffron party had made attempts to "poach" its MLAs but their attempts were foiled since theirs is a 'hardcore honest' party while the BJP had called for a probe into their allegations.