Delhi air pollution has also been affected by farm fires in Haryana and Punjab. According to SAFAR, the number of such fires has more than doubled over the past 48 hours - from 1,200 to 2,700

Pollution levels during Diwali in the national capital region were the lowest in five years, Delhi Chief Minister Arvind Kejriwal said today, while urging respect for the efforts of the people and the government to contain and to better the air quality in Delhi. Mr Kejriwal also highlighted the mega laser show organised by his government to encourage people to shun firecrackers, green or otherwise, saying it had been well received and would be staged at more venues next year.

"People of Delhi are working to reduce pollution. Firecrackers were burst after 8.30 pm yesterday (Diwali). Fewer crackers were burst this time. Diwali pollution is the lowest in five years," Mr Kejriwal told reporters while addressing a number of pollution-related issues, adding, "People have welcomed laser show... we will increase venues next year."

Based on levels recorded in previous years, authorities had braced themselves for a heavily polluted post-Diwali day. However, although the air quality turned to "very poor", it was better than it has been in at least the past three years, according to data from government's air quality monitors.

In the early hours of this morning the Air Quality Index (AQI) in Delhi measured 323, just when it was expected to deteriorate. In 2018, the AQI on the day after Diwali also measured 323. The year before it hovered around the 326 mark and, in 2016, it crossed 500. 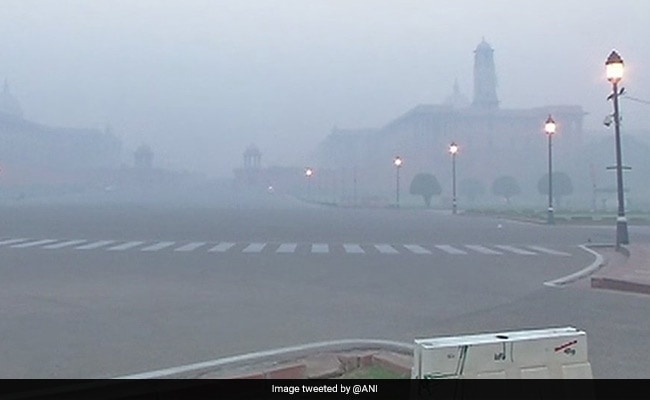 Last year, alarmed by the spike in pollution levels around Diwali, the Supreme Court said only green firecrackers, which reportedly cause up to 30 per cent less pollution, could be sold. The court also directed that firecrackers could only be burst in a two-hour window - 8 pm to 10 pm.

However, on Sunday night violations of this law were reported at several places around Gurgaon, Ghaziabad and Noida, something Chief Minister Kejriwal acknowledged, saying "lots of crackers (had been) burst... fewer crackers burst in Delhi as compared to these areas".

According to data from the System of Air Quality and Weather Forecasting and Research, AQIs in Noida and Gurgaon were also "very poor", with the former measuring 356 this morning.

Violations were also reported from several Delhi neighbourhoods, according to news agency PTI.

Delhi air pollution has also been affected by farm fires in Haryana and Punjab. According to SAFAR, the number of such fires has more than doubled over the past 48 hours - from 1,200 to 2,700.

"Smoke from crop fires have affected us earlier this time... we can't help crop fires from neighbouring areas. (We have) adequate quantity of masks... we shall begin distributing them. We are working hard to curb pollution," Mr Kejriwal said.

The Chief Minister also touched upon the "odd-even" scheme, his Aam Aadmi Party's (AAP) flagship pollution control cheme, which will be reintroduced to Delhi's streets from November 4.