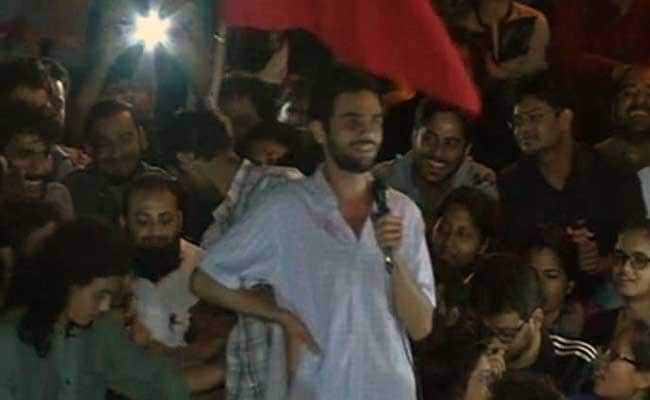 JNU student Umar Khalid has been accused of sedition for a February 9 event. (File Photo)

New Delhi: Delhi High Court today put on hold the disciplinary action taken by JNU administration against students Umar Khalid and Anirban Bhattacharya, accused of sedition in connection with a February 9 event, till their appeals against the decision are decided by the university's appellate authority.

Justice Manmohan granted the protection to both the students who have sought the same relief that was given on May 13 to Jawaharlal Nehru University Students Union (JNUSU) President Kanhaiya Kumar and others against whom disciplinary action was taken by the university after the row over the February 9 event this year.

"This court is of the opinion that the petitioners (Mr Khalid and Mr Bhattacharya) are entitled to same order as passed by this court on May 13, 2016...," the court said. While Mr Khalid was rusticated for one semester and slapped with a fine of Rs 20,000, Mr Bhattacharya was rusticated till July 15 and after July 23 he was barred from the university campus for five years.

Mr Bhattacharya was only given a week between July 16-22 to complete his thesis.

The high court had on May 13 granted the relief to Mr Kumar and others after JNUSU had undertaken to immediately withdraw the hunger strike and not to indulge in any further agitation.

During the hearing today, the court clarified that if the appeals of the two students are rejected, then the appellate authority's order would not be given effect for a period of two weeks.

It said that protection granted to Mr Khalid and Mr Bhattacharya was conditional and the JNUSU would not indulge in any protest or 'dharna'.

Mr Khalid and Mr Bhattacharya, who along with Mr Kumar have been accused of sedition in connection with the February 9 event, have said in their applications that they would be moving appellate authority against the disciplinary action taken by JNU on the basis of recommendations of a high level enquiry committee (HLEC).

The applications were filed in their petitions moved on May 9 challenging the disciplinary action taken against them. On May 10 when their matter was taken up for hearing, JNU had agreed in the court to extend the date of deposit of fine to Mr Khalid.