Aam Aadmi Party legislator Dilip Pande said that he had contacted the government and brought supplies and cooked food to the slum area.

Mehak and her husband Gopal, from Uttarakhand, have been earning a living as migrant labourers in Delhi.

Representatives of the Delhi government appeared at a slum in the northern part of the city on Tuesday to distribute much needed food among the residents, who have been running desperately short on supplies.

Aam Aadmi Party legislator Dilip Pande, who led the team said he was "very upset" after watching the NDTV report on the residents yesterday.

"I contacted the government and we have brought supplies and cooked food in this area. And for this child and her mother, we have made all arrangements," he added, referring to 22-year-old Mehak, a migrant worker whose plight had drawn much attention.

Eight days after giving birth, Mehak has been eating once every two days. When she gets really hungry, she drinks water, she had told NDTV yesterday.

Mehak and her husband Gopal, originally from Uttarakhand, have been earning a living as migrant labourers in Delhi. They are among the thousands pushed to the brink of starvation by the nationwide lockdown announced without warning three weeks ago.

"We have nothing to eat. There is no milk. We had just a bit of rice since morning," Mehak told NDTV. "There is no money, no work. Some people come to distribute food. We are managing with that," added her husband. 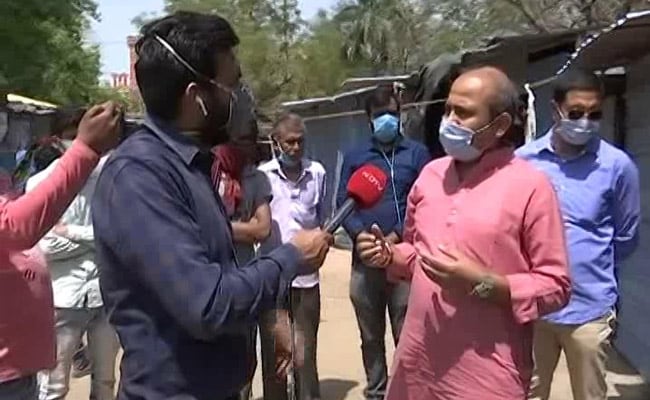 Aam Aadmi Party legislator Dilip Pande, who led the team said he was "very upset" after watching the NDTV report on the residents.

The couple said they did not even have resources to get to a hospital for their daughter's birth. "We made a big mistake coming to Delhi," Mehak said.

When the lockdown was announced three weeks ago, thousands of migrant labourers from the northern cities had started making their way back home in other states. Some managed to take the special buses ran by the Delhi and Uttar Pradesh governments. The others walked it. But the Centre had ordered states to seal borders, assuring the migrants of food and shelter.

Extra ration for free was promised under a central scheme, but people like Mehak who have ration cards from another state do not qualify for it without any paperwork.

Delhi Chief Minister Arvind Kejriwal said his government has made elaborate arrangements to feed the needy.

Mr Pande said, "We expect that educated people will step forward in such situations. We hope that if there are other such areas, people who are able extend help, or at least notify us".