The Delhi government has made it compulsory for people to wear face masks when stepping outside their houses in a bid to check the spread of coronavirus. 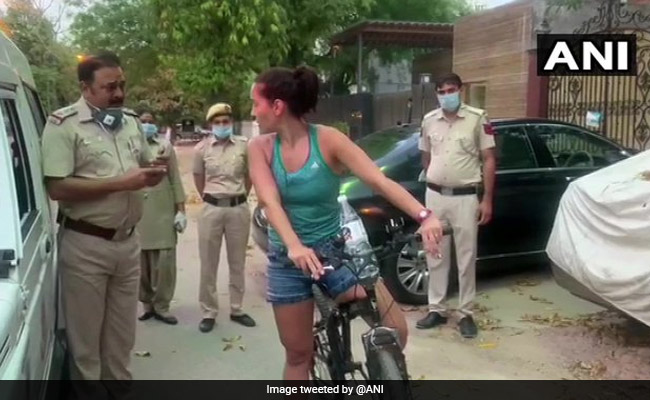 The entire incident was video-recorded by the Delhi police.

A woman from Uruguay was stopped by police for not wearing a mask while cycling in southwest Delhi, the police said today.

The incident took place at around 6.30 pm on Saturday, they added.

The Delhi government has made it compulsory for people to wear face masks when stepping outside their houses in a bid to check the spread of coronavirus.

A senior police officer along with his team was patrolling the area when they stopped the foreign national while she was cycling for violating the government order, the police said.

In a video clip recorded by the police, the woman could be seen arguing with the police when he told her that she was violating a government order by not wearing a mask.

The woman continued to argue and also noted down the name of the police officer, a senior police official said.

When asked to show her identity card, she refused to oblige, following which the police noted down her name, he added.

The entire incident was video-recorded by the police, the official said.

A representative from the Resident Welfare Association of the area was present when the incident took place. He assured the police that they were taking all measures and trying to convince the foreign nationals staying in the area to follow the guidelines, the official said.

The police have written to the embassy of Uruguay about the incident.