"Now No Shortage Of ICU And Oxygen Beds In Delhi," Says Arvind Kejriwal 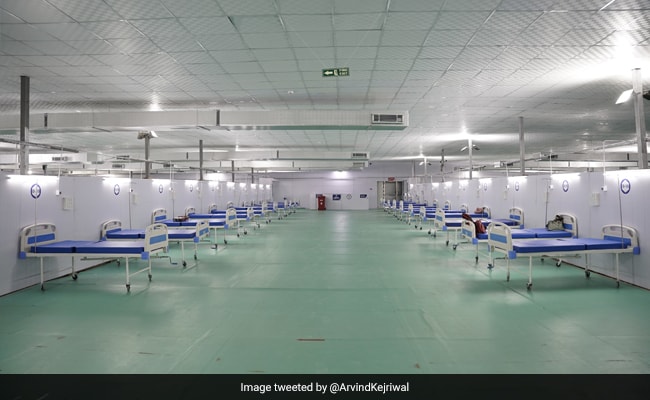 There will be no shortage of ICU or oxygen beds in Delhi, Chief Minister Arvind Kejriwal said Tuesday morning, a day after the opening of a 500-bed facility at the city's Guru Teg Bahadur Hospital.

"Coronavirus cases are going down in Delhi... so is the second wave. With your co-operation the lockdown was successful and we've increased the number of oxygen beds in the past few days. Yesterday we set up 500 new ICU beds near GTB Hospital," the Chief Minister said.

"Now there is no shortage of ICU and oxygen beds in Delhi," he added.

Mr Kejriwal also expressed hope the city - among those worst-hit by the second wave of coronavirus infections and deaths - had overcome the worst of this particular challenge.

Daily cases have gone down from over 25,000 in the last week of April to below 13,000 on Monday, and the positivity rate has dropped from over 36 per cent to around 19 per cent.

There are, however, still more than 85,000 active cases in the national capital.

As cases drop, experts have cautioned against laxity and assuming (again) that the virus has been defeated; on Sunday Mr Kejriwal repeated that warning as he extended the lockdown; "the positivity rate has gone down but still we can't afford leniency," he said.

500 ICU beds have been constructed in 2 weeks at Ramlila Maidan opp. GTB hospital. Patients will be admitted from tomorrow. My heartfelt gratitude to all the engineers who made it happen in record time. pic.twitter.com/PbI917IYmc

Shortly afterwards Delhi Health Minister Satyendar Jain made a similar appeal during his press conference, calling on people to stay guarded and follow the rules till active cases are below 3,000.

Mr Jain also explained the low testing rates - which experts fear may hide the true number of cases - as fewer people leaving their home during lockdown to get tested.

The city's healthcare system was hit hard in the first wave, with ICU or oxygen beds unavailable or in very short supply. The current rush to increase beds, particularly those in ICUs (intensive care units) and with stable oxygen supply, comes amid fear over a third wave of infections.

On April 27 the Chief Minister had said Delhi would get around 1,200 additional beds by May 10.

This morning Delhi reported around 12,600 new cases and 319 deaths in the past 24 hours. Overall, nearly 20,000 people have died in the course of the pandemic.

The city remains under a "strict" lockdown that has been extended till 5 am May 17.

Earlier today Mr Kejriwal also called on Prime Minister Narendra Modi and the centre to share Covid vaccine formulas with other companies to speed up the manufacturing process.

That call came a day after Mr Jain red-flagged low vaccine stocks in the national capital.