Chief Minister Arvind Kejriwal was addressing a gathering of nearly 5,000 people to thank Delhi residents for what the government says was a successful odd-even car rationing trial. (Press Trust of India photo)

New Delhi: Chief Minister Arvind Kejriwal had ink thrown at him today while he was addressing a gathering on the success of odd-even road rationing scheme at Delhi's Chhatrasal stadium.

Around 4.50 pm, as the Chief Minister had started his speech to the 5,000-strong audience, a woman in her 20s walked towards the dais and threw ink, and some papers and a CD at Mr Kejriwal. She was immediately detained by the police.

The woman has been identified as Bhavna Arora, 26, who belongs to the "Aam Aadmi Sena" a splinter group of Aam Aadmi Party formed by party rebels. She is not married and lives with her family at Rama Vihar in Rohini, the police said. 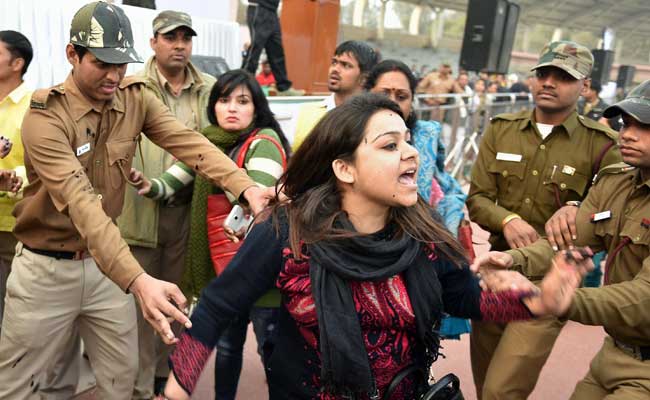 A woman in her 20s walked towards the dais and threw ink, and some papers and a CD at Delhi Chief Minister Arvind Kejriwal. (Press Trust of India photo)

The incident prompted angry reaction from AAP government, with Deputy Chief Minister Manish Sisodia slamming the Delhi Police by calling the incident a major security lapse and wondered whether it was "sitting in readiness to stage an attack on Kejriwal".

"What if somebody throws acid instead of ink? Even after the incident, the woman gave bytes on camera and was not arrested. This is a conspiracy by police," said Mr Sisodia.

"I can see a BJP conspiracy," he further added. "They want to take advantage of such a situation and attack Kejriwal and the entire Cabinet. They may also kill people because they cannot stand the success of the odd-even scheme and AAP's popularity among the masses. Police is a part of the conspiracy."

Delhi BJP President Satish Upadhyay said the party does not approve of such incidents, "but on the other hand we feel that the incident reflects the growing frustration among people towards the Kejriwal regime."

The police have denied charges of mismanagement at the stadium, saying any such allegation is "unfounded". "Adequate police arrangements were made as per the practice," said a Delhi Police spokesman.
Comments
Odd-evenOdd-even in DelhiArvind KejriwalKejriwal ink attack

Manish Sisodia, Admitted To Hospital With COVID-19, Also Has Dengue