Lajpat Nagar's central market has been shut until further orders as social distancing and other Covid protocols were not being followed at the market.

Two more big markets, including Lajpat Nagar's famous Central market, have been shut in Delhi for violation of Covid norms a day after two others were closed till July 6.

The Central Market has been shut until further orders as social distancing and other Covid protocols were not being followed, officials said today. The market has over 2,000 shops and sees a massive footfall everyday.

Lajpat Nagar's traders told NDTV that they are ready to follow all rules and will try their best to implement social distancing.

"We keep telling customers to stand apart and wear masks. We try our best. Majority of the people here wear masks. But I can't say that its 100 per cent," Pawan Singh, a shopkeeper tells NDTV.

"Our livelihoods are at stake. The pandemic has already caused huge financial losses for us," the traders told NDTV saying they will hold meetings with authorities over reopening the market.

On Saturday, the Punjabi Basti and Janata market in Nangloi area of the national capital were closed till Tuesday for violation of Covid-appropriate behaviour, an official order said.

If any shopkeeper is found violating the order or any act which may spread the deadly virus, necessary action would be taken against them, it warned. 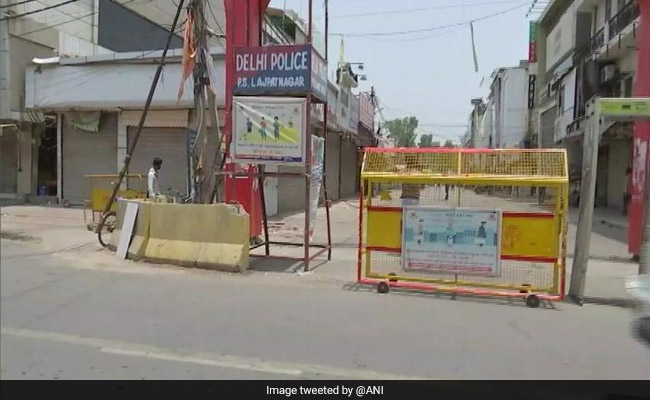 Central Market has been shut until further orders as social distancing and other Covid protocols were not being followed, authorities said

Twelve shops in Shahdara's Gandhi Nagar market have also been shut from July 4 to 12.

Sources in the Delhi Disaster Management Authority say markets like Sarojini Nagar and Kamla Nagar have already been issued notices last week about overcrowding. If rules are not followed, stricter action may be taken, they warned.

People shopping at the markets however feel a crowd cannot be controlled even with stricter rules.

"Even if you have stricter rules you cannot control the crowd in a market. I do feel unsafe but I have to shop also," says Komal, a customer at a crowded Sarojini Nagar market.

Delhi was under a complete lockdown from April 19 to May 30 following which the capital has been seeing a phased unlock process. Chief Minister Arvind Kejriwal said the Covid situation was improving and the economy of the city needed to be revived announcing the ease of restrictions.

From June 14, shops and weekly bazaars were opened up then with up to 50 per cent vendors and only one market functioning in each municipal zone every day.

Delhi has entered the sixth phase of the easing of Covid lockdown from today with stadiums and sports complexes reopening, although they still won't allow spectators. Cinema halls, multiplexes, and swimming pools, however, will remain shut.

Delhi Police has issued 1.37 lakh challans for not wearing masks and 22,000 for violations of social distancing norms between April 19 and July 2 this year, according to official data.

The city was one of the worst affected during the deadly second wave of the pandemic this year which saw a huge number of fatalities. The unprecedented surge led to a collapse of the medical infrastructure with hospitals crumbling under pressure due to lack of beds, oxygen and medicines.

The situation has now improved with the capital reporting only 94 cases in the last 24 hours.