TM Krishna's Concert, Postponed Earlier, Back On, With Help From AAP

Carnatic singer TM Krishna said: "I have been trolled for a long time for my social position, my perspectives on politics in India and my disagreements with the BJP regime." 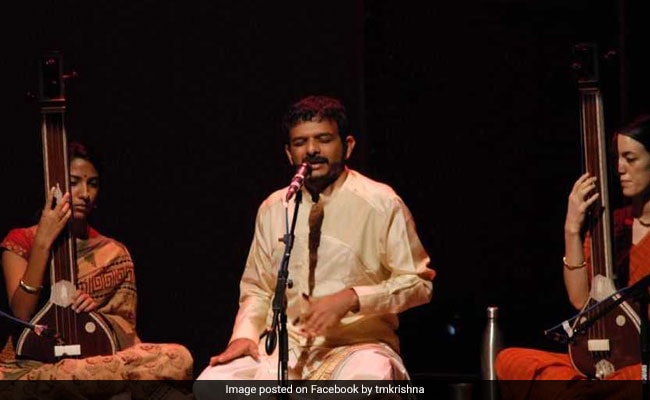 Carnatic singer TM Krishna will finally be able to entertain his fans in the national capital, a day after his sponsors "postponed" the concert over threats from right-wing elements on social media. He will perform on Saturday, and the venue and time will be made public later today, according to the Arvind Kejriwal-led Delhi government.

The Magsaysay Award winner first came to the attention of right wing groups in August when an audio clip reportedly of his Carnatic songs on Allah and Jesus Christ was circulated on WhatsApp. A fringe group in Tamil Nadu had threatened him for singing the songs.

Soon after the sponsors Airports Authority of India and SPIC MACAY, a non-profit for classical music, "postponed" his concert scheduled this weekend, the Aam Aadmi Party government reached out to him with Mr Kejriwal's deputy Manish Sisodia, who is also the culture minister, saying he was in touch with the singer and "will be happy to help out", people with direct knowledge of the matter told NDTV.

"No artist should ever be denied an opportunity to perform. I have invited TM Krishna to perform on November 17 for the people of Delhi. It's important to maintain the dignity of the art and artists," Mr Sisodia said.

The Carnatic singer said he has earlier been accused of being pro-Christian, pro-conversion and an "urban Naxal".

"The troll army has the underlying patronage of people in power," he said. "I have been trolled for a long time for my social position, my perspectives on politics in India and my disagreements with the BJP regime... I believe in every art form... Allah, Jesus and Ram make no difference... It is a multi-lingual and multi-religious country," Mr Krishna said.

Aviation body AAI's chairman Guruprasad Mohapatra said they postponed the event due to "urgent circumstances", and gave no further details. "We would like to inform that due to some urgent engagements, 'Dance and Music in the Park' programme jointly organised by AAI and SPIC MACAY, scheduled on 17 and 18 November has been postponed and new dates would be announced shortly. Inconvenience is regretted," the AAI had said in a statement.

The AAI and SPIC MACAY said the event was not cancelled but "postponed", news agency Press Trust of India reported. The AAI was the major sponsor, said Rashmi Mallik of SPIC MACAY, adding the AAI postponed the event due to "some internal challenges within AAI".

When the controversy over his songs erupted in August, the angry singer had tweeted:

Considering the vile comments and threats issued by many on social media regarding Karnatik compositions on Jesus, I announce here that I will be releasing one karnatik song every month on Jesus or Allah.
T.M. Krishna #art#religion#jesus#allah#communalism#freedom#music

Born in Chennai, TM Krishna started learning music at the age of six and trained under several top musicians like Chingleput Ranganathan, Vidvan Seetharama Sarma and Semmangudi Srinivasier. An economics graduate from Madras University, he has authored three books -- Voices Within: Carnatic Music - Passing on an Inheritance, A Southern Music - The Karnatik Story, and Reshaping Art.