Dinesh Chundawat expressed dissatisfaction with the probe and said that when the police files its closure report, he would do something about it. 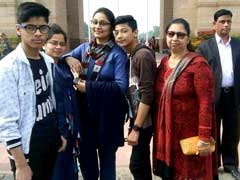 Eleven members of a family were found dead in mysterious circumstances in Delhi's Burari last year.

Dinesh Chundawat, the eldest son of the Chundawat family whose 11 members were found dead in mysterious circumstances in Delhi's Burari last year, does not believe that they died while conducting a ritual.

It will be a year since 10 members of the family were found hanging from an iron-mesh in the ceiling of the house in North Delhi, while the body of Narayan Devi, 77, the head of the family, was lying on the floor in another room on the morning of July 1.

The eldest among Narayani Devi's five children, 62-year-old Dinesh Chundawat lives in Rajasthan's Chittorgarh district. He expressed dissatisfaction with the probe and said that when the police files its closure report, he would do something about it.

"We are not satisfied with what the police are saying that they died while carrying out the ritual, but how much do I fight? I am alone in this battle. The police do not have answers to my questions," he told news agency Press Trust of India.

He said the police told him that his mother died by tying something around the almirah handle and its other end around her neck, but he did not find the explanation plausible as, he said, the handle was weak.

The police had registered a case of murder but, Mr Chundawat said, his family did not have any enmity.

"My family didn't even call someone as 'tu' (a casual form of referring to 'you'), let alone abuse anyone. I tend to lose temper but my brothers were very calm. I do not know what happened but it is difficult to believe what the police are saying," he said.

Mr Chundawat said his family was not able to mourn properly after the tragedy.

"My sister who stays in Panipat and I have lost everything. It is difficult to forget them. At that time, there was so much media attention and so many things were being written about tantriks and other rumours were being circulated. We have not had the time to mourn our loss," he said.

His daughter Vishakha said she has not even deleted the mobile numbers of her cousins from her phone.

"We used to chat almost on a daily basis and sometimes, I feel an urge to call them but there is no one now. That void will never be filled," she said.

According to the psychological autopsy report of those found dead, the family members did not wish to commit suicide but the deaths happened due to an "accident that occurred during a ritual".

The psychological autopsy reported the absence of intention to commit suicide.

According to the report, the place of the incident was not secluded and the doors were kept open. Narayan Devi's grandaughter Priyanka had also kept work pending for the coming Monday. She had only days before got engaged and was supposed to get married last year.

A packet of milk was kept in the fridge, probably to be used the next day and Lalit, the youngest son in the family, had recharged the mobile phones of other members a day before the incident.

According to the police, Lalit and his family believed he had visitations from his dead father and that this ritual was being carried out at the father's behest.

Soaked chana dal (black gram) was found in the kitchen, probably kept for the next day's meal. No one was found to be stressed as indicated by the presence of faecal matter (the digested, solid waste) in the large intestine of all the dead, it said.

Besides the grief, Mr Chundawat also had to deal with rumours about the Burari house being haunted.

"Things are being said about the house but I have stayed there after the incident. I go there every month and in May, I was there for eight to 10 days," he said.

Mr Chundawat said even his wife had stayed there and both of them were fine.

He also rejected rumours that he planned on selling the property, saying there were many memories associated with the house.

Mr Chundawat found support in some neighbours who said the house was not haunted and also dismissed rumours about people shifting to other localities after the incident.

Naveen Batra, a property dealer from the locality who knew the Chundawat family for close to 20 years, said that everything was normal there.

"There were rumours that many residents were planning to shift. That is completely false. I have been living here since 1983. I haven't shifted. Why would we? Just because of a death? Even my father passed away a few years ago, but will we vacate the house for that reason? No."

Pappu and his brother, who were very close to the Chundawat family, have been living in the same house as caretakers, he said.

Dr Ravindra Kumar, who has a clinic a few metres away from the house, said there are a few people who were trying to take advantage of this incident.

He claimed some of them wanted to purchase the property at a minimal rate. "They want to tag it as haunted house and ultimately purchase it at a cheap rate so that they can build a multi-storey building for a huge profit," he claimed.

Mr Chundawat said he had moved to his new house in Chittorgarh a few months after the incident.

"I have a big house here. Dhirendra and Dushyant (his 15-year-old nephews who also died) wanted to have a swimming pool and other good things. Everything was built according to their taste, but they are not here," he said.