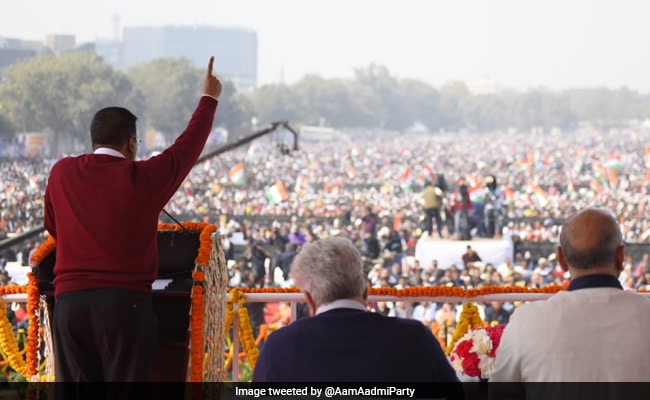 Arvind Kejriwal was sworn in as Delhi's Chief Minister for the third time.

Thousands, who had gathered at the venue, joined Mr Kejriwal as he sang. "In the end, I will sing a song.... but on one condition, I will sing a line and all of you will join. This is a prayer to fulfill our collective dream," the AAP chief said as he started singing.

"Hum Honge Kamyaab" is a song translated by Hindi poet Girija Kumar Mathur. The original, "We Shall Overcome", was a gospel song, which eventually became a protest anthem during the Civil Rights Movement in US in 1960s.

"Insan ka ho insan se bhaichara", the song he sang at last two oath events, is a patriotic song is from an old Hindi film "Paigham". Originally sung by Manna Dey, the AAP chief has sung the song many times, even during his anti-corruption campaigns.

Along with Mr Kejriwal, six other ministers of the Delhi cabinet, including top AAP leader Manish Sisodia, took oath today after his party swept Delhi elections, winning 62 of 70 assembly seats.

Dedicating his victory to the people, Mr Kejriwal, in his address, said, "Elections are over now. No matter who you voted for, you are part of my family. This is not a victory for me. This is a victory for people of Delhi."

The AAP, which called the oath ceremony as a "Delhi specific affair",  had also invited 50 school teachers, doctors, exam toppers, auto drivers, caretakers and sanitation workers, who have been dubbed "Dilli Ke Nirmata (Makers of Delhi)".