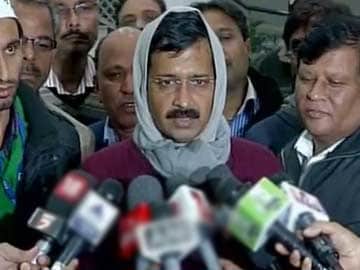 New Delhi: The capital's Aam Aadmi Party (AAP) government transferred around 800 officials of the Delhi Jal Board on Monday night in a massive reshuffle said to be aimed at improving efficiency and delivery.

Sources said transfer orders were issued at the orders of Chief Minister Arvind Kejriwal, who is the chairperson of the Delhi Jal Board (DJB).

"All those officials who have worked for over three years in a particular place have been transferred to a different place," a senior DJB official said.

The transfer orders were issued on a day when three officials of the water distribution utility were suspended after a sting operation by a TV channel purportedly showed them taking bribe.

The Aam Aadmi Party was voted to power in Delhi on a wave of promises that included 700 litres of free water for every household. After taking charge last week, the Kejriwal government announced that 667 litres of free water would be provided to households with valid water connections and functional meters installed by the Jal board.

Promoted
Listen to the latest songs, only on JioSaavn.com
Sources said ensuring equitable distribution of water is a priority for the new government and more steps are likely to be taken to improve water distribution. These steps include a crackdown on what is described as the city's "tanker mafia", who, allegedly in collusion with Jal board officials, thrive on an artificial shortage of water in several parts of the city.

The current average demand for potable water in Delhi is around 1,100 mgd (million gallons per day) and the Delhi Jal Board supplies around 800 mgd water after treating raw water in its treatment plants. The demand is projected to touch around 1,400 mgd by 2017. Delhi relies heavily on neighbouring states Haryana and Uttar Pradesh for the supply of raw water.
Comments
Delhi Jal BoardAAPArvind KejriwalAam Aadmi PartyDelhiDelhi Jal Board officials