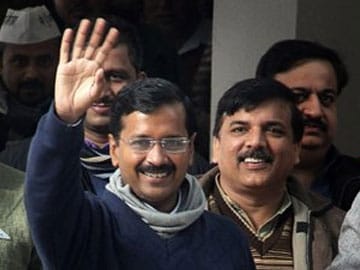 New Delhi: Arvind Kejriwal, who will be Delhi's new Chief Minister, has turned down a government bungalow that comes with his new role.

Mr Kejriwal formally rejected official accommodation - one of the biggest perks of a government post - when Delhi Chief Secretary DM Sapolia came to him with the offer this morning. (Track LIVE updates)

Ending the capital's "VIP culture" was one of the key promises made by Mr Kejriwal's year-old Aam Aadmi Party (AAP) in its poll manifesto. Following up on that pledge, the chief minister designate has also told the police that he will not accept security cover.  "I don't need any security. I don't need any escort...God is my biggest security," he said in a letter to the Delhi Police on Monday. (God will protect me, says Arvind Kejriwal)

AAP leader Manish Sisodia said the party would also make good on another promise - to bring the Jan Lokpal Bill, or its version of an anti-corruption law.

"Even if the sky falls, we will pass the Jan Lokpal Bill in 15 days. If the Congress decides to withdraw support, let them," he declared on a day the party's leaders met to discuss government formation. (Meet Team Kejriwal's likely ministers)

Promoted
Listen to the latest songs, only on JioSaavn.com
Mr Sisodia is among the probable ministers in the new Delhi cabinet, along with Somnath Bharti, Saurabh Bhardwaj, Rakhi Birla, Vinod Kumar Binny and Shazia Ilmi. (Read: AAP to finalise ministers)

The AAP won the second highest number of seats in the state elections earlier this month, but fell eight short of a majority. The Congress, which was crushed after 15 years of governing Delhi, will provide external support for the minority government. Although BJP won the most seats in Delhi, it refused to form government without a majority. (Op-Ed: Arvind Kejriwal amps up his bold political experiment)

Man Allegedly Beaten To Death By Neighbours In Delhi Over A Fight: Police