After Big Victory In Supreme Court, Arvind Kejriwal Gets A Reality Check

The services department, which decides on posting of officials, has bluntly told Manish Sisodia that his order cannot be implemented. 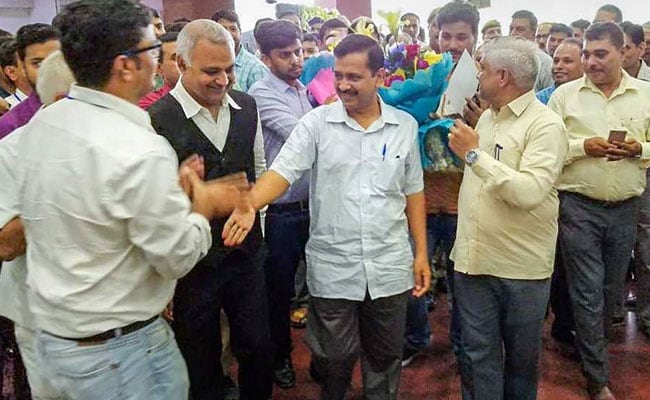 Chief Minister Arvind Kejriwal and his deputy Manish Sisodia got down to business right after the Aam Aadmi Party government's huge victory in the Supreme Court on Wednesday. One of the first orders that Deputy Chief Minister Sisodia signed sought to restore the powers of the ministers to transfer officials. But it is not going to happen.

The services department, which decides on posting of officials, has bluntly told Mr Sisodia that his order cannot be implemented.

Sources told NDTV that the services department has told Manish Sisodia that there was nothing in the Supreme Court verdict that cancelled the August 2016 order issued on the Lieutenant Governor's instructions.

The department has also indicated that the Lt Governor and top bureaucrats would continue to decide on transfer and posting of officials till the 2016 directive is either cancelled by the court or replaced with a new order pre-approved by Lt Governor Anil Baijal.

The rejoinder is a huge setback for the AAP government that had spent a greater part of the day celebrating the Supreme Court as a victory for democracy and the city's elected government.

The top court had ruled that the Lt Governor had no independent decision-making powers beyond land, police and public order. The court did underline the primacy of the elected government over the Lt Governor.

Mr Sisodia had interpreted the verdict to imply that the elected government was quite literally, the city's administrative boss.

As the minister in-charge of the services department, Mr Sisodia said he had taken the decision that IAS officers would be transferred only on the chief minister's orders, not the Lt Governor.

Chief Minister Arvind Kejriwal has been locked in a bitter power tussle with the centre ever since his AAP swept to power in Delhi in 2015 and accuses the centre of chipping away at its powers.

In recent months, AAP has also blamed the BJP-led coalition at the centre of provoking the bureaucracy to revolt against the elected government after a top official Anshu Prakash accused Mr Kejriwal of assault at a midnight meeting in February this year.