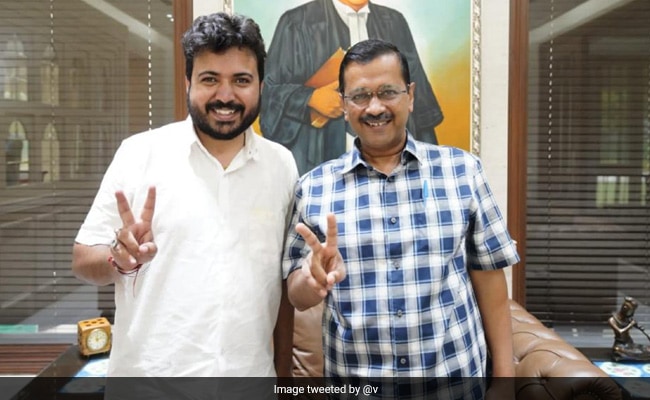 The Aam Aadmi Party today lost in Punjab but it continued its winning streak in Delhi with its candidate, Durgesh Pathak, winning West Delhi's Rajinder Nagar bypoll with a margin of over 11,00 votes against BJP's Rajesh Bhatia.

The seat fell vacant after Aam Aadmi Party MLA Raghav Chadha, resigned and got elected to the Rajya Sabha from Punjab. Raghav Chadha shared a picture of himself with Mr Pathak on Twitter saying, "I thank all the constituents of Rajinder Nagar assembly constituency for once again showering their love and blessing on AAP. Today's bypoll victory is an affirmation of 'Kejriwal Model of Governance.' Best wishes to my brother Durgesh Pathak, as I pass on the baton to him."

I thank all the constituents of Rajinder Nagar assembly constituency for once again showering their love and blessing on AAP.

Today's by poll victory is an affirmation of ‘Kejriwal Model of Governance.'

Best wishes to my brother Durgesh Pathak, as I pass on the baton to him. pic.twitter.com/epUYFutbi7

For 31-year-old Pathak this is his first election victory. In 2020, he had contested from the Karawal Nagar constituency but lost to BJP's Mohan Singh Bisht by over 8,000 votes.

On being asked about BJP's allegations during the campaign that Mr Pathak was an outsider (in contrast to Rajinder Nagar resident and BJP candidate Rajesh Bhatia) the newly-elected MLA said, "I reside in the hearts of people."

Mr Pathak who hails from UP's Gorapkhpur was a civil services aspirant but got associated with AAP since its anti-corruption movement and is currently the party's incharge for Himachal Pradesh which will go to polls later this year.

AAP Chief and Delhi Chief Minister Arvind Kejriwal, who had campaigned for Durgesh Pathak, tweeted to thank the voters and said "People have defeated dirty politics and appreciated good work". The party's official handle also tweeted a picture of Kejriwal feeding sweets to Mr Pathak after his victory.

The bypoll witnessed a high-pitched campaign with Union ministers such as Piyush Goyal and Smriti Irani campaigning for BJP's Rajesh Bhatia.

AAP leader Atishi today took a dig at such a campaign and tweeted, "The special thing about Rajendra Nagar by-election was that senior BJP leaders helped us and we thank all of them from the heart. You worked for Maa Bharti by rising above party politics, you deserve the most congratulations."

The AAP holds majority in the assembly with 62 seats out of total 70 seats, while the BJP currently holds eight seats.

Delhi's power structure will remain unaffected by the bypoll results but is key in assessing public mood ahead of municipal elections which are likely next year.