The 3-year-old boy had a miraculous escape but was trapped inside the car; his cries could be heard by witnesses and the police. 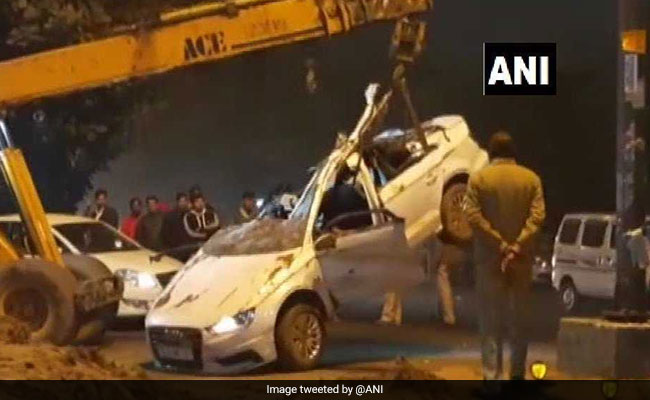 The sand-laden dumpster overturned on the Audi in Rohini

A 3-year-old boy lost his parents after a dumper, laden with sand, overturned while making a U-turn at high speed and crushed to death three members of his family, who were travelling in their Audi car, police said Wednesday.

The victims were identified as Sumit Singhal (29), his wife Ruchi Singhal (27) and mother Reeta Singhal (65), they added.

The 3-year-old boy had a miraculous escape but was trapped inside the car; his cries could be heard by witnesses and the police. Subsequently, he lost consciousness but was rescued by fire department and disaster management teams.

The accident took place in Rohini near ESI Hospital on KN Katju Marg. The KN Katju Marg police station was informed about the accident around 1 am. The family was returning from Gurgaon after attending a marriage ceremony of a relative, police said.

The dumper, which was laden with sand, overturned on the car in such a manner that the car was completely crushed under its weight and the sand was scattered both inside and outside the vehicle, they added.

The Delhi Fire Service sent five vehicles, including a Rescue Responder, around 1.10 am after they received a call about the accident.

Police said the car was being driven by Sumit.

After reaching the spot, the police team rushed the family members to a nearby hospital.

The child was unconscious but did not have any external injuries, police said.

Cranes were called in to remove the dumper.

"The door of the Audi was badly mangled. Sumit's wife Ruchi, sitting next to Sumit, was lying immobile. She was taken out first and rushed to hospital where she was declared brought dead," said Anuragh Pillai, who lives near the house of the victim family in Rohini Sector 15.

Just before the accident, Sumit had overtaken the vehicle of Mr Pillai who was returning home after work.

S D Mishra, deputy commissioner of police (Rohini) said Sumit, his mother and his wife were declared brought dead by doctors. Sumit's child was rescued safely and is out of danger, he added.

A case has been registered and the matter is being probed, Mr Mishra added.

The dumper's driver, Harpal, 48 and a resident of Udesipur in Haryana, had managed to run away from the spot but was later arrested from Gannaur in Sonipat, the DCP said.

Police said a medical examination has been conducted to ascertain if the driver was under the influence of alcohol at the time of the accident. The reports are awaited.

His statement has been recorded and will be verified with the reports of Forensic and Crime team which visited the spot, officials said.

Sumit, a businessman, owned a factory in Narela area.