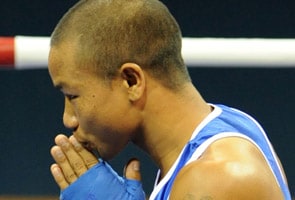 India's Suranjoy Singh on Wednesday won the Commonwealth Games flyweight gold by a walkover after his opponent failed to show.

The 24-year-old from Manipur in northeast India stood in the ring for five minutes but with no sign of Kenya's Benson Njangiru, the referee declared him the winner.

The win -- greeted by loud cheers from the home fans -- was India's first gold of the boxing finals, in which they have three fighters. Suranjoy, who works for the Indian Navy, went into the fight as firm favourite.

He is the current Asian champion and won gold at the Commonwealth Boxing Championships test event in New Delhi in March 2010, taking just 25 seconds to beat Oliver Lavigi of Mauritius.