CWG corruption: Over 20 officers under scanner, endgame for Kalmadi & Co? 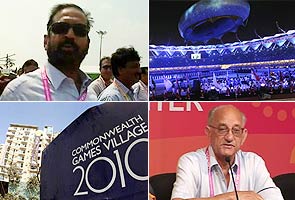 New Delhi: The closing ceremony of the Commonwealth Games ended with rainbow-coloured splatter that lit up the night sky. The fireworks may, in fact, just be beginning.

A panel has been set up by the government to look into the corruption charges in the Games. Headed by former Comptroller and Auditor General, VK Shunglu, the panel will submit its report within three months to the Prime Minister. It has the mandate to review every transaction, if needed.

NDTV has also learnt that the government has drawn up a list of over 20 officials whose role in "organising and conducting" the games will be probed.

The Organizing Committee for the Games was headed by Suresh Kalmadi, who was snubbed by the Prime minister on Friday and not invited to attend a reception for the Indian athletes and medal-winners at the Commonwealth Games. (Read:Kalmadi failed to win confidence of people, says Sheila Dikshit)

In a similar snub on Saturday, Sonia Gandhi met the winners, but Kalmadi was again not invited.  (Read: Kalmadi not invited by PM)

The special panel appointed by the government will probe the financial bungling and administrative lapses. In fact, the multi-agency investigations have gained momentum.

The Comptroller and Auditor General (CAG) is looking into financial misappropriation; and the Enforcement Directorate (ED) is probing the routing of funds, which have been traced to tax havens like Mauritius.

The Central Bureau of Investigation (CBI) will be examining tenders issued for various Games related projects, which are already under scrutiny after exposes on items being bought at absurdly inflated rates.

The Central Vigilance Commission (CVC) is looking into allegations of corruption in all infrastructure projects like the stadia and Games' venues.

Members of the Organising Committee, sources say, may find themselves detained soon for questioning. There seems to be evidence that proves money connected to the Games was deposited in tax havens like Mauritius.

Thirty case files have been prepared based on early investigations by the Enforcement Directorate, the CBI, and the Income Tax department. The agencies have used, as their cornerstone, an interim report submitted by CAG before the Commonwealth Games. That report found an array of deals that seemed conceived to misuse taxpayers' money.

According to the interim report, international broadcast rights and sponsorship deals had been awarded by the Organising Committee in violation of basic procedure to consultants and companies that did not offer the best terms. That caused a loss of at least Rs 20 crore.

Officials who have been uncovering evidence to support the financial  track record of the organisers have reportedly, so far, not asked the Organising Committee for copies of contracts and documents because they were concerned that files would suddenly go missing.

PTI adds that the CAG also resumed its own investigation on Friday. Inspection officials are auditing accounts for, among other aspect, the contracts that saw equipment being leased by the Organising Committee for use by athletes during the Games. The CAG had begun assessing the Games' expenditure in August, but had to stop the audit related works in the last week of September as they could not access the premises of the Central Public Works Department (CPWD).

The official said the CAG had to suspend their audit for over a fortnight since most of the CPWD offices are located at venues that were being used for the Games.

According to PTI, the biggest venue - Jawaharlal Nehru Stadium - has yet to be inspected by the CAG.

The CAG is likely to submit its final report to the government by the end of January. The CAG audit will examine the cost of the Games and whether it justifies the quality of the material used in venues and equipment.

Promoted
Listen to the latest songs, only on JioSaavn.com
External Affairs Minister SM Krishna on Friday said, "Success of Games is one side of the story but natural corollary will be followed. Government has already said this and Government will follow it up."

The issue is certain to become a political one.  "Sonia Gandhi and Manmohan Singh had said that probe will happen after the Games are over. We are giving them a couple of days to see what action they take. If not, BJP has also made plans," said BJP spokesperson Prakash Javadekar.
Comments
CWG corruptionCWG scamKalmadiCWG probeCAGCBIEDShunglu