Fearing the worst, their friends called the police to carry out what out turned out to be a dramatic rescue. 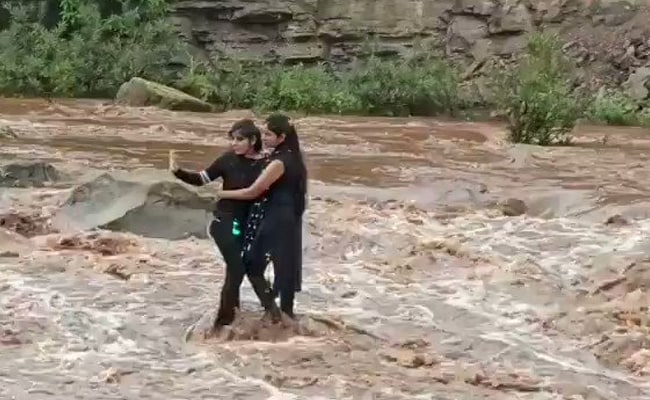 An attempt to click a selfie in the middle of a Madhya Pradesh river nearly cost two girls their lives as they were trapped on a rock amid rapid current of water. Thankfully, a team of brave policemen and locals rescued them without caring for their personal safety.

The incident took place in the state's Chhindwara district. A group of six girls - all from Junnardeo - had gone on a picnic on the banks of river Pench. Two among them - Megha Jawre and Vandana Tripathi - walked to the middle of the river, on a rock, to click a photograph from a smartphone. Suddenly, the river's flow quickened, putting the girls in grave danger.

Fearing the worst, their friends called the police to carry out what turned out to be a dramatic rescue.

A video of the incident shows the scared girls huddled on the rock as policemen appear to be discussing their plan of action meters away.

The police team comprising 12 personnel, along with district administration and locals, rescued the girls later.

Several young people across the world, in their bid to get famous on the Internet, have died taking selfies while pulling dangerous stunts.

In 2018, a Hyderabad man was hit by an oncoming train as he tried to take a selfie near railway tracks. He miraculously survived the accident but was grievously injured.