Watch: Elephant In Odisha Fell Into A Muddy Well. 2-Hour Rescue Pays Off

Sundargarh, Odisha: Horrifying visuals showed a huge crowd surrounding the giant open well, with the adult elephant stuck right in the middle with its entire body submerged in muddy water. 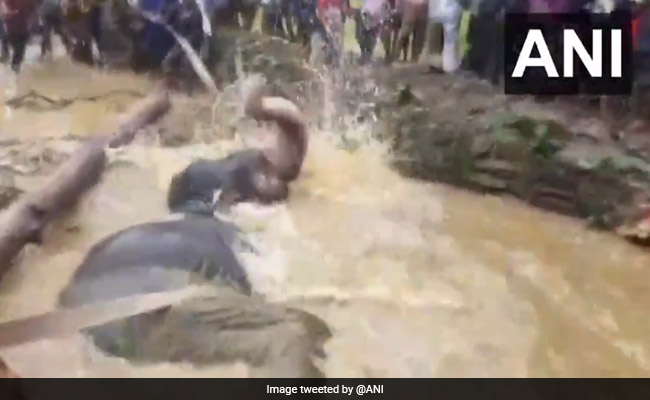 Sundargarh, Odisha: The elephant, stuck in muddy water in the well, thrashes around

An elephant submerged deep inside a muddy open well in Odisha was miraculously rescued after a harrowing two-hour rescue operation by forest and fire officials. Horrifying visuals showed a huge crowd surrounding the giant open well, with the adult elephant stuck right in the middle with its entire body submerged in muddy water. Only the top of the elephant's head and body could be seen as officials got ready to pull the distressed elephant out using long ropes.

In the video released by news agency ANI, the elephant can be seen desperately thrashing in the muddy water, with forest officials trying their best in pulling up the elephant from all the corners of the well using ropes.

With a huge collective effort, the officials, with the help of many villagers, manage to pull the elephant out of the water. The elephant, in order to not sink into the mud, grabs hold of a nearby branch with its trunk.

While it is now seen to be out of the muddy water, the elephant is not safe yet. A thick boundary of mud above the well on which the elephant is now trying to precariously balance itself, inhibits it from getting up with its hind legs.

#WATCH Odisha: Forest officials & locals rescue an elephant which had fallen into a well, near Birtula village of Sundargarh district. (24.10.19) pic.twitter.com/Z0w2WMSQY4

A huge crowd of officials and villagers alike now successfully pull the elephant's hind legs out of the mud, after which the elephant finally gets up and runs away from the muddy water, accompanied by loud cheers from the entire crowd.

The elephant was reportedly a part of a herd of 18 elephants which had come close to Dumerta village in Odisha's Sundargarh district on Wednesday night, reported news agency PTI. The rescue operation began on Thursday morning.

As the herd of elephants was chased away by villagers, one of the elephants had fallen into the well. 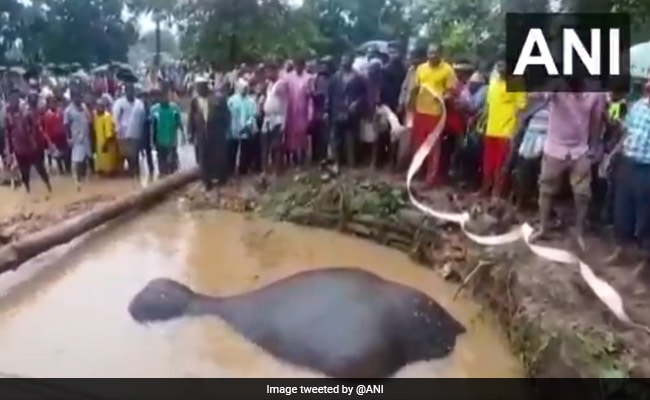 Sundargarh, Odisha Elephant Rescue: Only the top of the elephant's head and body could be seen as officials got ready to pull the distressed elephant out using long ropes

Officials had thought of using JCB machines to pull the elephant out but could not do so because of the mud, according to PTI.

We found the elephant in a very distressed state as it looked tired," a forest official was quoted as saying by PTI.

"We tried to get two JCBs to the spot for digging a path but the heavy machines could not reach near the well because of slushy condition there ... The fire service personnel used their long ropes and managed to pull the jumbo out," the official said.