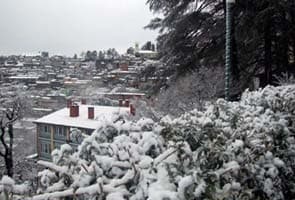 Shimla: Himachal Pradesh's capital Shimla and its nearby tourist spots woke up on Wednesday to a white sheet of snow, giving the resort and its neighbouring areas a picturesque look.

The residents of this town shivered as icy winds brought down the minimum temperature to 0.1 degree Celsius.

This was the season's second significant snowfall that froze the "Queen of Hills", as Shimla was fondly called by the British.

According to the Met office here, Shimla recorded 7 cm of snow.

Other picturesque tourist resorts Manali in Kullu district and Dalhousie in Chamba district have been experiencing snow for the past three days.

Kalpa in Kinnaur district, which saw 39 cm snow, recorded a low of minus 3.8 degrees Celsius while the temperature was minus 1.6 degrees Celsius in Manali. Dharamsala, which recorded 8.8 mm rain, registered 6.2 degrees.

Meanwhile, traffic movement beyond Dhalli, 10 km from here, remained suspended on Wednesday since a large stretch of the Hindustan-Tibet Road was under a thick blanket of snow.

The entire Kinnaur district and towns in Shimla district such as Narkanda, Jubbal, Kotkhai, Kumarsain, Kharapathar, Rohru and Chopal are cut off due to heavy snow, a government official said.

Promoted
Listen to the latest songs, only on JioSaavn.com
Connectivity on the Kullu-Manali national highway remained snapped near Patlikuhl, some 20 km before Manali.