One dead after over 50 fire cracker shops gutted in Vadodara 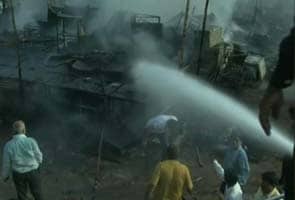 Vadodara: At least one person was charred to death and another injured today in a fire that broke out in the city's biggest firecracker market, officials said.

The blaze swept through Kalabhavan Grounds, the venue of the city's biggest firecracker market gutting over 50 shops and several vehicles parked there, they said.

Chief Fire Officer of the Vadodara Municipal Corporation (VMC) H J Tapariya said one unidentified dead body has been found from the debris at the spot.

"The body of the deceased, who is yet to be identified, was recovered from the debris at the site and sent for postmortem," he said.

"27 fire engines and 150 fire personnel were deployed to contain the blaze which was brought under control within one and half hours," he said, adding short circuit might be the cause of the fire.
Comments
Vadodara

Rain Expected In Delhi, NCR In Next 2 Hours: Weather Office