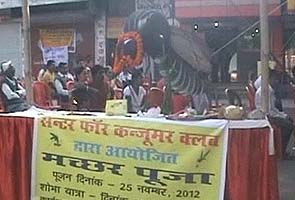 Bokaro: To ward off dengue and malaria fever, people in Jharkhand's Bokaro district are offering prayers to the 'mosquito god' to seek a shield against the life-threatening mosquito-borne diseases.

A big mosquito statue was installed at Chas a day earlier and a procession organised on Monday by devotees who beat drums and chanted mantras to appease the winged god.

A priest recited mantras in the presence of hundreds of people and the statue was also garlanded and worshipped before the holy fire.

"Hundreds of suspected dengue cases have been reported in the district. The health department is yet to wake up. We have sought a shield from the 'mosquito god' and tried to appease it by installing a statute and worshipping it," Rajendra Mahto, a district resident, said.

Promoted
Listen to the latest songs, only on JioSaavn.com
Four people have died of suspected dengue in the district which has reported around 130 cases of high fever this season. The blood samples of the patients have been sent to Ranchi and the district administration was yet to confirm the dengue cases.

"There is no facility in the district to detect dengue. The government has failed to act in time to curb the menace," said Poonam Sinha, another devotee of the 'mosquito god'.