Man "Dressed Up Like Dustbin" A Head-Turner In Odisha. He Has A Message

With "Save Future", "Don't use polythene bags", written on his dress, Bishnu Bhagat regularly visits schools and meets children to spread awareness on how harmful polythene is for the environment. 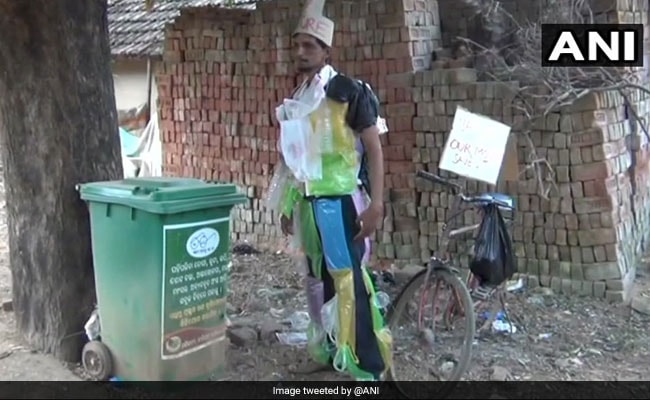 Bishnu Bhagat dresses himself in polythe bags to pass on an important message.

Bishnu Bhagat, 36, dresses himself in colourful polythene bags and goes about his business every day in Odisha. He doesn't mind being referred as a "chalta firta dustbin" (walking dustbin), because the underlying message he wants to convey is, "If I look ugly to you, think about earth and what we have made it."

With "Save Future", "Don't use polythene bags", written on his dress, he regularly visits schools and meets children to spread awareness on how harmful using polythene is for the environment. Bishnu Bhgat interacts with students on how polythene impacts environment.

"I noticed a cow eating food wrapped in polythene bags. Along with the food, it would also eat the polythene. Few days later, it died. This event stirred me and I decided to do my bit for the environment and the animals," said Mr Bhagat, a resident of Baripada.

One of the school students, Sanjana, said, "From Mr Bhagat I learnt that I should not use polythene bags and also encourage my friends and family members to stop its use." 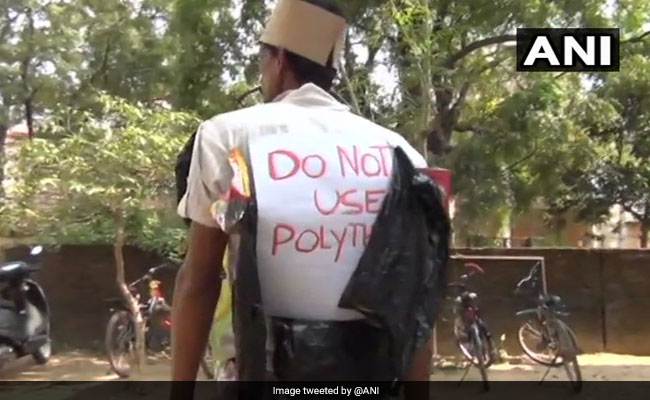 Aloka Dutta, the principal of a school in Mayurbhanj, said that the moment Mr Bhagat entered the school, there was a lot of buzz among the students. They knew he would talk about something related to polythene. "I appreciate Mr Bhagat's unique idea of dressing himself up with polythene bags to draw attention. This way, he had children's interest and they learnt important life lesson from him," Ms Dutta said.

Mr Bhagat's efforts are also being noticed and appreciated by the authorities.

Mayurbhanj's Collector Vineet Bharadwaj said that his efforts can culminate into a mass movement in the district and everyone can collectively work towards a better future.