Hope for Bangalore girl with 27 fingers and toes 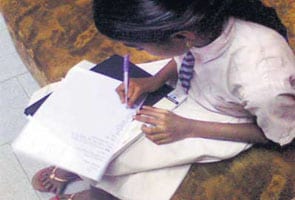 Bangalore: Thirteen-year-old Varalakshmi V, a student from Rajenakunte Government High School in Bangalore, has spent her entire life with an unusual congenital condition that has left her with multiple vestigial fingers and toes that leaves onlookers staring in amazement.

Varalakshmi who lives with her mom Parvathamma (35), a house cleaner in Sadenahalli Layout, first approached MS Ramaiah Hospital with Rajendra Kumar, the principal of her school seeking help.

Kumar said, "She is in the ninth grade now and a very good student. Even with her problem, she writes very well, and has good handwriting."

He added, "Unfortunately, she only has her mother, and they have many problems to deal with. Doctors have agreed to perform the surgery, which normally costs Rs 60,000-70,000, for free."

Sundresh B, an orthopaedic surgeon from MS Ramaiah Hospital, said, "Varalakshmi's condition affects the growth of her hands and feet. She has eight fingers in each hand and about four to five extra toes in each feet."

He added, "Polydactyly is not uncommon, but generally a person has one vestigial finger at the end of the hand. In her case, the thumbs are absent and we're worried about her ability to function."

"I want this surgery soon. The pain in my feet is unbearable. I can't walk long distances. Even my friends in school want me to have this operation so that I can play with them."

She added, "After my feet begin to look like everyone else's, I want to play and walk around normally. But I don't have a problem doing any other work. I am used to it now," said Varalakshmi.

Promoted
Listen to the latest songs, only on JioSaavn.com
"We want to make her feet look normal so she can use normal shoes like her peers. She has been wearing ill-fitting shoes that cause her a lot of pain.

We want to wait until her summer holidays because we don't want to interrupt her studies. Her recovery will take at least three months so that's the best time for it," he added.