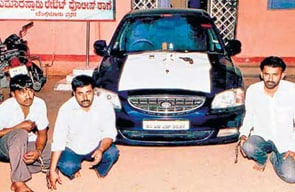 Bangalore: The Unit President of a pro-Kannada organisation, Rakshana Vedike and the editor of a tabloid has been arrested for extorting money from sex workers in Bangalore.

The police have charged V M Giri and his accomplices, Venkatesh and Rajendra, with blackmailing sex workers and extorting money from them. The police are on the lookout for Harish, yet another member of the gang.

The cops recovered a revolver, nine live cartridges, a car, mobile phone, camera and Rs 2,500 from the gang.

The racket was exposed when the gang targetted Hemanth S, the employee of an Internet parlour, accusing him of running a prostitution racket.

The gang allegedly abducted Hemanth, took him to an isolated spot and demanded Rs 25,000 ransom at gunpoint.

When Hemanth expressed his inability to pay, the gang allegedly snatched his mobile phone and took Rs 2,500 before letting him go. Hemanth later complained to the police.

Following the arrest of the gang members and their subsequent interrogation, it emerged that the gang had been extorting money in this manner for some time now.

K S Layout Police Sub-Inspector, R Jagadish said Giri would gather information on the brothels and prostitution rackets in and around the city.

"Giri would approach the brothels and tell them he was a media person. He would assure them that he would neither publish the report nor inform the police if they paid up," said Jagadish.

Promoted
Listen to the latest songs, only on JioSaavn.com
Giri allegedly forced Hemanth to pawn his wife's valuables costing Rs 31,000, and asked him to pay more if he did not want more trouble.

"Giri began the tabloid to extort money. A majority of his victims were involved in immoral activities and did not lodge a complaint," said Jagadish.

Woman Kills 4-Year-Old After Verbal Spat With Her Mother In Rajasthan: Police