52 killed as bus falls into gorge in Himachal Pradesh 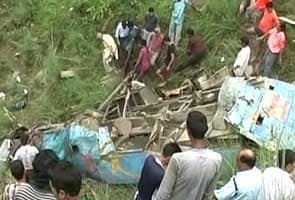 Shimla: At least 52 people, including 18 women and two children, were today killed and 46 others injured when an overcrowded private bus veered off the road and fell into a gorge in Himachal Pradesh's Chamba district.

The mishap took place near Rajera, 8 km from the district headquarters of Chamba, when the bus driver lost control over the vehicle after a tyre burst and it fell into the 250-feet- deep gorge, police said.

The 42-seater bus, on its way to Chamba from Dulera, was carrying over 100 passengers and many of them were travelling on the roof of the vehicle when the tragedy struck, they said.

As many as 39 people, including the driver, died on the spot, while 13 succumbed to their injuries in the hospital.

"All the bodies have been recovered," Chamba Deputy Commissioner Sunil Chowdhary said.

The injured were rushed to a hospital in Chamba where the condition of 12 is stated to be critical.

Himachal Assembly Speaker Tulsi Ram and local MLA B K Chauhan rushed to the spot and supervised the relief and rescue operations.

Of the total relief of Rs 1 lakh each announced for the family of the deceased, the district administration distributed immediate relief of Rs 10,000 each to the next of the kin of the victims, while the seriously injured were provided medical aid and relief of Rs 5,000 each.

A magisterial enquiry has been instituted to ascertain the cause of the accident, officials said.

Promoted
Listen to the latest songs, only on JioSaavn.com
Chief Minister P K Dhumal has expressed grief over the tragedy and directed the local administration to provide relief to the victims.

3 Workers Killed In Illegal "Rat Hole" Mine In Assam, 5 Arrested